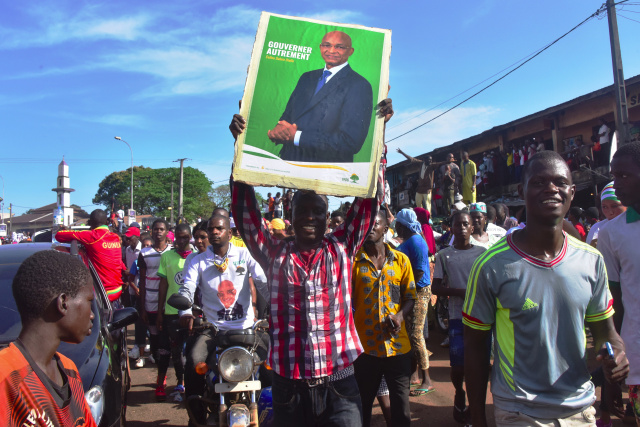 Supporters of Guinean opposition leader Cellou Dalein Diallo gesture and hold posters as they parade in the streets of Conakry as part of Guinea presidential campaign on September 25, 2020. (Cellou BINANI / AFP)

(AFP) - The West African country of Guinea, in the middle of a turbulent election campaign, has closed its land borders with Guinea-Bissau and Senegal, a senior government official said on Tuesday.

The closure is for security reasons, the source in the Guinean capital Conakry said without elaborating.

Guinea-Bissau's interior minister, Botche Cande, earlier told journalists that he had "received reports from border agents indicating that the frontier had been unilaterally closed since Sunday".

Guinean Security Minister Albert Damantang Camara could not be reached by AFP for comment.

The president of Guinea-Bissau, Umaro Sissoco Embalo, has tense relations with Guinean President Alpha Conde, who is seeking a controversial third term in office in the October 18 ballot.

A Guinean representative was a notable absentee at ceremonies on September 24 to mark Guinea-Bissau's independence day.

Sources in Bissau, the capital, say that Guineans living there had been recently trying to return home to vote after encountering difficulties in doing so at their country's consulate.

Guinea, one of the poorest and most volatile countries in Africa, has been buffeted by political turbulence ahead of the vote.

Conde is bidding for a third term in office, defying critics who say he forced through constitutional changes this year enabling him to sidestep two-term presidential limits.

The 82-year-old, a former dissident, became Guinea's first democratically elected president in 2010 and was re-elected in 2015.

Protests against his suspected plan for a third term brought thousands of Guineans into the street in late 2019. Dozens people have been killed in clashes.

On Tuesday, protesters opposing a Conde third term in the capital Conakry again clashed with security forces, which led to arrests, an AFP journalist saw.

Africa » Be a reporter: Write and send your article » Subscribe for news alert
Tags: Guinea, Vote