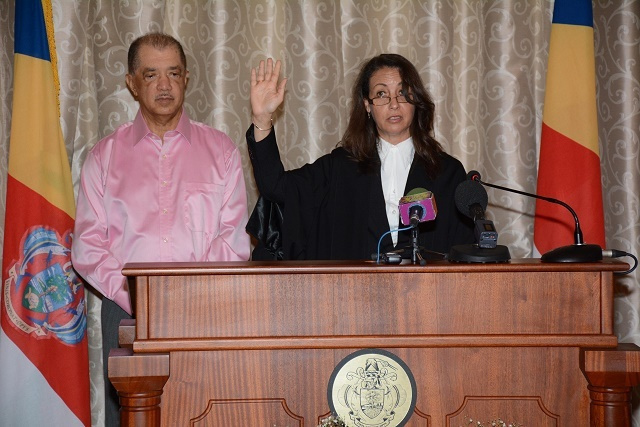 Twomey, who was sworn in as Chief Justice in August 2015, is the first Seychellois woman to occupy the post. (Seychelles Nation)

(Seychelles News Agency) - Seychelles' outgoing Chief Justice, Mathilda Twomey, said that clearing backlogs and bringing justice for all citizens have been the highlight of her tenure. Twomey, who was sworn in as Chief Justice in August 2015, is the first Seychellois woman to occupy the post. Twomey's last day in the office is Wednesday 30, and a ceremonial sitting was held for her at the Palais de Justice.

"The one thing I am most proud of is the way we have administered cases and the court in general. The statistics speak for itself. By doing so, we have helped to bring justice at the doorstep of every citizen in Seychelles. It has always been my message that we are here to serve the people. Justice is not for us, but for everyone," Twomey told a press conference on Monday.

Twomey was educated at Regina Mundi Convent and Seychelles College and won a scholarship from the British Council to study law in Europe. She was conferred with a Diplome de Droit at the University of Paris-Sud, Sceaux in 1985 and got a BA in English and French Law at the University of Kent at Canterbury in 1986.

She practised in Seychelles at the Ocean Gate Law Centre and then the Attorney-General's Chambers. In 1992, together with former Attorney General of Seychelles, Pesi Pardiwalla, she opened the law firm Pardiwalla and Twomey. She was a member of the Constitutional Commission which drafted the new Constitution of Seychelles in 1993.

As part of her achievements, Twomey said that she has helped greatly in advocating for the rights of women in society. "They have equal rights as men and they have the right as well to stand up and defend those rights," said Twomey.

Her challenge was to clear the backlog of cases. A case is considered backlogged if filed three or more years prior to the current year.

She said that "there was even a case pending for 19 years and this is unacceptable. It was a challenge to make judges and lawyers understand that the public is paying for a service and they deserve justice at all cost."

Commenting on the backlog of the courts, the Registrar of the Supreme Court, Juliana Estico, said, there has been a reduction in the number of filed cases which allowed the team to further reduce the backlogged cases, in line with their strategic plan.

The Senior Magistrate, Benjamin Vipin, said that the Chief Justice has helped to bring accountability within the judiciary.

"Three marked areas of her contribution and upkeep apart from other areas of law, is in the field of civil law, the rights of child especially the sexual assault and the reformative approach to drug-dependent, personal users under the Misuse of Drugs Act," said Vipin.

He added that "on a personal note CJ has been an inspiration and fiercely dedicated to working and had a no nonsensical approach to work, her work speaks for herself, a person with grit and determination, but after work, she brought out her creole spirit, of laughter, dance and singing."

The library and archive manager, Kevin Etienne-Cummings, said that under the leadership of Twomey the judiciary has started the modernising process by setting up a library system where the public can at least see what legal resources are available online.