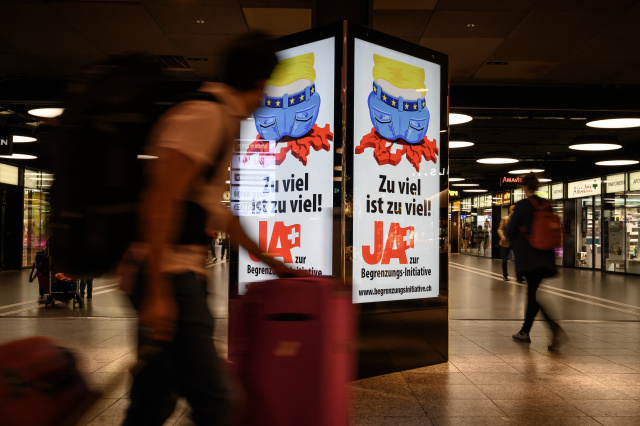 A picture taken on September 1, 2020 in Bern shows a backlit electoral poster by right-wing Swiss People’s Party (SVP) showing a cartoon worker wearing a belt studded with EU stars, crushing the red and white map of Switzerland with his wide rear end that translates from German as "Too much is too much!" to advertise their initiative nationwide voted on September 27, 2020 demanding that the government scrap the freedom of movement agreement with the EU within a year. (Fabrice COFFRINI / AFP)

(AFP) - Brussels has hailed a Swiss refusal to limit immigration from the EU, hoping it could finally lead Bern to embrace a pact regulating some of the 120 accords between them.

But the wealthy Alpine nation appears in no rush to consumate the match.

Sunday's popular vote rejecting an initiative to dramatically rein in immigration from EU countries has capped off decades of mixed messages on what kind of relationship Switzerland desires with its largest trading partner.

After turning down EU membership in 1992, the Swiss voted in 2000 for a range of bilateral accords with the bloc, including free movement of people across their borders.

But 14 years later, voters narrowly accepted an initiative to slap quotas on immigration by EU citizens, which while never fully implemented threw relations with the bloc into years of disarray.

Brussels has made no secret of its growing impatience to pin down a "framework accord" to pull together various bilateral agreements touching on access to the single market and fine-tuning applicable Swiss and EU laws.

Since 2008, the EU has insisted Switzerland must sign a framework agreement before concluding any new bilateral deals with the bloc.

The overarching accord would require revising five existing bilateral agreements on free movement, industrial standards, agriculture, air and land transport -- and the creation of a joint arbitration court that could enable compensation for breeches.

In 2017, Brussels stepped up pressure, making the Swiss stock exchange's longtime access to the single market conditional on concluding a framework deal.

The Swiss president at the time slammed that move as "unacceptable", but Bern and Brussels nonetheless managed to negotiate the final text of the framework agreement a year later.

But movement towards ratification had remained stalled in anticipation of Sunday's vote.

The EU appeared to breathe a collective sigh of relief when more than 60 percent of Swiss voters rejected the call to rip up the agreement on free movement with the bloc.

"I look forward to the Swiss Federal Council (government) now moving swiftly on the signature and ratification of the Institutional Framework Agreement."

But while the Swiss came out strongly to back maintaining the EU borders open, there is less support of the overarching framework agreement.

Only the centrist Green Liberal Party wants the text to be rapidly examined by parliament.

The left-leaning parties and the unions have raised concerns that the text would threaten Switzerland's high wage levels, since Swiss salary protection measures would be watered down to bring them in line with EU laws.

"Protecting salaries is a red line for us," Benoit Gaillard of the Swiss Trade Union Federation told AFP.

Scepticism is also rife on the right.

The populist right wing Swiss People's Party (SVP) -- Switzerland's largest party which has built its brand slamming immigration and EU influence -- has blasted the agreement as a "dictate" from Brussels that threatens Swiss sovereignty.

Most centrist parties are also wary.

"All the parties have been putting off for years becoming the first to say the deal is dead," Christian Democrats chief Gerhard Pfister told the Tages-Anzeiger daily.

Even if most parties were to line up behind the deal, SVP would surely demand it be put to a referendum.

And according to an online Tamedia poll, only 16 percent of 15,000 people questions supported ratifying the agreement as is

General » Be a reporter: Write and send your article » Subscribe for news alert
Tags: Switzerland, EU