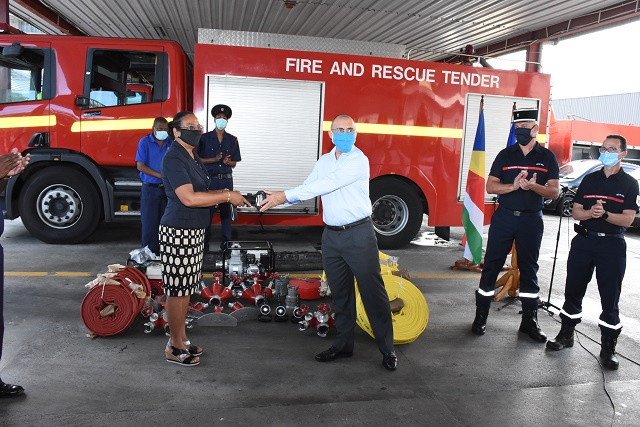 The donation was flown from Reunion to Seychelles by a French military plane on Thursday and handed over to the local fire service on Friday. (Seychelles Nation)

(Seychelles News Agency) - France has donated firefighting equipment to the Seychelles Fire and Rescue Services Agency (SFRSA) as a show of solidarity following a major fire last month which burned in the two main landfills of the island nation.

The donation from Reunion Island -- a French overseas department in the Indian Ocean -- was flown into the country by a French military plane on Thursday and handed over to the local fire service on Friday. The value of the donated material was $23,000.

The French Ambassador to Seychelle, Dominique Mas, said the donation is a great testimony of solidarity between Reunion and Seychelles.

"For us, neighbours of Seychelles, it was normal that we could show France's solidarity in the face of this accident which, very fortunately, could be brought under control by the firefighters with the help of the various public services concerned by this crisis. As during the sinking of the Wakashio in Mauritius, Reunion has once again shown its commitment alongside the countries of the region," said Mas.

The Ambassador added that strong and important cooperation already exists between the firefighting services of Seychelles and Reunion, particularly in the field of forest fires.

In the last few years, French firefighters have been in Seychelles to train their local counterparts in forest fire fighting skills. A delegation of firefighters from Praslin travelled to the French island last year to share the experience of forest fires.

"The equipment donated will be able to complete the monitoring system set up around the waste treatment centre. Ultimately, it will be used to fight against any fire, in particular house fires which are human tragedies every time," added MAS.

The deputy chief at the SFRSA, Regis Bethew, told SNA that the equipment was much needed after some of the agency's equipment was damaged during the landfill fire.

Bethew added that he is thankful for the two expert firefighters from the St Denis fire department who not only brought the equipment but who also gave training to the local firefighters on how to use the new equipment but also how to undertake routine maintenance."The donation of five pumps, including portable ones equipped with their hoses and nozzles and other fittings, is much needed for us to discharge our responsibilities in firefighting," he said.

"I would also like to pay tribute here to Reunion which, through the Fire and Rescue Service of its Departmental Council, has provided us with these valuable motor pumps and power and extinguishing equipment. It must be said that beyond these materials, Reunion Island also carries out a real transfer of skills because the equipment is sent by two expert firefighters, who also contribute to building the capacity of the services of the Seychelles Department of Risks and Disasters," said Marina Confait.

Confait, the principal secretary for Foreign Affairs, accepted the donation on behalf of the government of Seychelles – 115 islands in the western Indian Ocean.

"I draw from this approach from Reunion, a beautiful gesture of solidarity and a beautiful spirit of generosity which must be greeted by each of us. This shows how much cooperation between our islands is very important and must be strongly supported," she added.