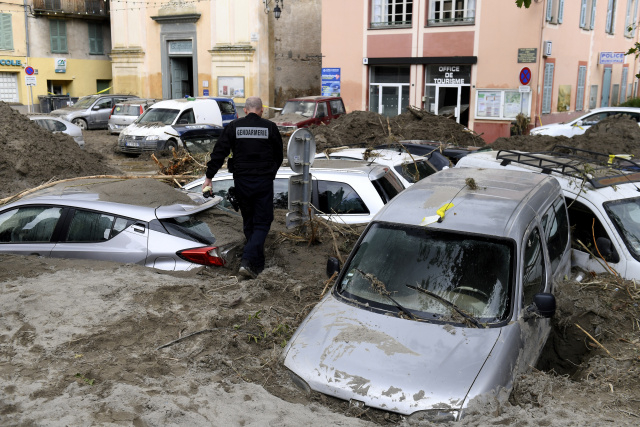 A police officer walks amongst vehicules submerged in mud in Breil-sur-Roya, south-eastern France, on October 4, 2020, after extensive flooding caused widespread damage in the Alpes-Maritimes departement. French and Italian rescue services stepped up their search efforts after floods cut off several villages near the two countries' border, causing widespread damage and killing two people in Italy. Eight people remained unaccounted for on the French side of the border after storms, torrential rain and flash floods battered the area, washing away roads and houses, cutting off entire villages and triggering landslips. (NICOLAS TUCAT / AFP)

(AFP) - Rescue services stepped up their search efforts in southwestern France on Sunday after floods cut off several villages and killed two people in Italy, with eight still missing in France.

Breil-sur-Roya, a French village close to the Italian border, was a scene of devastation with houses buried in mud and turned-over cars stuck in the riverbed, an AFP journalist said.

Eight people were still missing on the French side of the border after storms, torrential rain and flash floods battered the area, washing away roads and houses, cutting off entire villages and triggering landslips.

Rescue efforts were concentrated on the Roya valley where around 1,000 firefighters backed up by helicopters and army units resumed their search hoping to find survivors, and giving assistance to people whose homes were destroyed or inaccessible.

Storm Alex barrelled into France's west coast on Thursday bringing powerful winds and rain across the country before moving into Italy, where regions across the north suffered an onslaught on Saturday.

"What we are going through is extraordinary," the prefect of the Alpes-Maritimes region said Bernard Gonzalez.

"We are used to seeing images of such disasters on other continents, sometimes with a lack of concern, but this here is something that affects us all," he told AFP.

France has declared the region a natural disaster zone.

Local authorities gave shelter to some 200 people overnight, while food and thousands of bottles of water were being airlifted into remote villages cut off by the storms.

Gonzalez called on the families of the missing people not to give up hope.

"Just because their loved ones haven't been able to get in touch doesn't mean that they have been taken by the storm," he said.

Many landline and some mobile phone services were disrupted, with some villages using satellite phones to communicate with rescue services.

Despite forecasts of more rain, rescue efforts were to continue throughout Sunday, Gonzalez said.

"The helicopter procession will continue all day long," he said, adding however that the prospect of more heavy weather was "a worry".

On the Italian side of the border several villages were also still cut off, and many roads blocked, AFP journalists said.