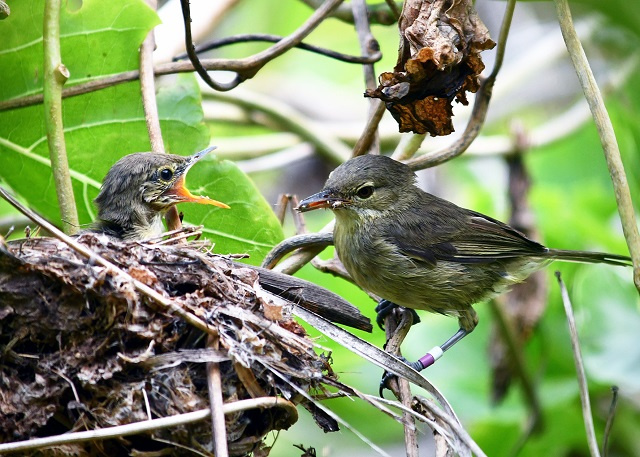 The Seychelles warbler, a small greenish-brown bird with long legs and a long slender bill, was close to extinction in the 1960s due to the introduction of predators. (Charli Davies, Nature Seychelles)

(Seychelles News Agency) - Nature Seychelles has received $78,000 to construct a new research centre on Cousin Island special reserve which has helped save the once critically endangered bird the Seychelles warbler, the environmental organisation said on Monday.

The funds were donated by the Seychelles Warbler Research Group -- a team of biologists from the European universities of East Anglia, Groningen and Sheffield Under -- and will help finance a campaign called 'Building back better in the age of COVID.'

The Seychelles Warbler Research Group has been studying and helping in the conservation of the Seychelles warbler since 1985. This unique long-term research programme in partnership with Nature Seychelles which manages Cousin Island has helped save this once critically endangered bird from the brink of extinction.

The Seychelles warbler, a small greenish-brown bird with long legs and a long slender bill, was close to extinction in the 1960s due to the introduction of predators such as rats and cats and other adverse effects of human habitation. When Cousin was turned into a nature reserve in 1968, the island became the bird's last remaining refuge.

The chief executive of Nature Seychelles, Nirmal Jivan Shah, said, "This special bird, whose rescue caused a chain reaction that saved an entire island, whole ecosystems, and many other species, is doing it again. This time around, it is bringing research back to Cousin. We sincerely thank our friends and colleagues of the Warbler Group and hope to continue what is actually the longest running-international research programme in Seychelles and also to cascade other types of research."

On his side, Professor David S Richardson from the University of East Anglia said, "We are happy to donate the £60,000 ($78,000) that we have raised towards the building of the 'Seychelles Warbler Research House' on Cousin Island to enable research and conservation to continue and flourish on this amazing nature reserve."

The island's iconic International Field Station set up by BirdLife International in 1971 has housed hundreds of students, researchers, volunteers and conservation boot camp participants. The station became structurally unsafe after severe beach erosion that impacted the island early this year and ate away at its foundation. The added economic catastrophe caused by the COVID-19 impact has made it impossible for the NGO to fund a rescue of the house or to build a new facility.

Cousin is a granitic island located 2 km west of Praslin – the second-most populated island of Seychelles – a group of 115 islands in the western Indian Ocean. It is one of Indian Ocean's first 'sea and island reserve' and received its designation as a special nature reserve in 1975.

Boot camp in conservation offered on island in Seychelles