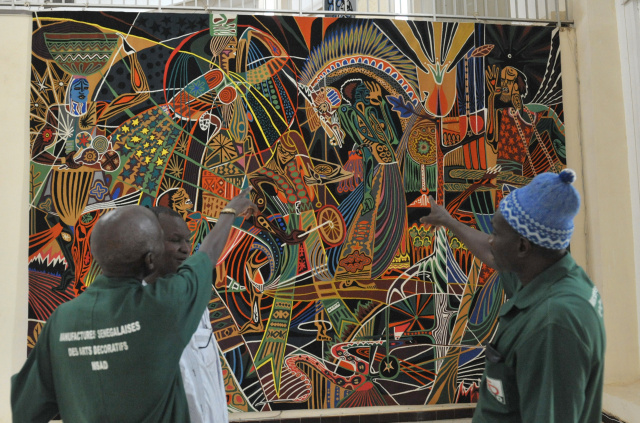 Artists stand in front of a hand-woven tapestry which will decorate the headquarters of the United Nations in New York, on September 4, 2012, at the tapestry of Thies, a decorative art center where frescoes decorating presidential palaces and various buildings are manufactured. (AFP PHOTO/SEYLLOU)

(AFP) - French lawmakers on Tuesday unanimously voted to return prized artefacts to Benin and Senegal more than a century after they were looted by colonial forces and hauled back to Paris to be displayed in museums.

The pieces include a royal throne and statues taken by the French army during a war in Benin -- then the wealthy African kingdom of Dahomey -- as well a sabre once wielded by a 19th-century Muslim sheik in what is today Senegal.

After 49 MPs in the National Assembly, the lower house of parliament, voted Tuesday night in favour of the bill -- with none voting against -- it will now head to the Senate.

If approved, France will officially restore to Benin 26 items from the Treasure of Behanzin, looted during the 1892 pillaging of the palace of Abomey.

They include the throne of King Glele -- a centrepiece of the 70,000-odd African objects held at the Quai Branly-Jacques Chirac museum in Paris.

Senegal will get back a sword and scabbard said to have belonged to Omar Saidou Tall, an important 19th century military and religious figure in West Africa.

The pieces are officially held by the Army Museum in Paris, but are on long-term loan to Dakar, where they have been exhibited since last November.

Former culture minister Franck Riester said the return of the artefacts was part of a "strengthened desire for cooperation" with the two francophone West African countries.

He spoke to the assembly because current Culture Minister Roselyne Bachelot was isolating after coming into contact with a positive coronavirus case.

Ahead of the vote, Bachelot insisted the bill was "not an act of repentance or reparation, nor a condemnation of the French cultural model".

President Emmanuel Macron pledged shortly after his election in 2017 to look into the restitution of African cultural treasures.

Benin's President Patrice Talon has previously said he was "not satisfied" even while welcoming "small steps" being taken by France.

"To approve a specific law to hand back 26 artefacts is strictly the minimum," he told the magazine Young Africa, arguing for a law that gave "global restitution based on a precise inventory".

Last month five activists went on trial in Paris for trying to seize an African funeral staff from the Quai Branly, France's pre-eminent indigenous art museum, in a bid to put new pressure on Macron to return more items.

An expert report commissioned by Macron in 2018 counted some 90,000 African works in French museums, most of them at the Quai Branly.

Britain has also faced calls to return artefacts, notably the Elgin Marbles to Greece and the Benin Bronzes to Nigeria, while museums in Belgium and Austria house tens of thousands of African pieces.