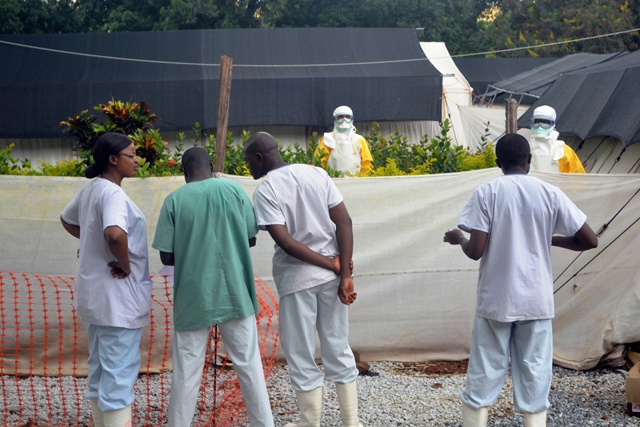 Members of Doctors Without Borders (MSF) wear protective gear at the isolation ward of the Donka Hospital in Conakry on July 23, 2014. (AFP PHOTO / CELLOU BINANI)

(Seychelles News Agency) - Seychelles has called for the urgent establishment of an African Centre for Disease Control to help fight the spread of epidemics such as the Ebola virus that is currently sweeping through Western part of the continent.

The call was made by Seychelles’ Permanent Representative to the African Union, Ambassador Joseph Nourrice, as African Union Chiefs held an emergency meeting in the Ethiopian capital of Addis Ababa last week to agree on a strategic response to halt the Ebola outbreak, which has already claimed more than 2,000 lives.

The American Centre for Disease Control and Prevention (CDC) in Altanta, Georgia, is a United States national public health institute that works to keep Americans safe and healthy through the control and prevention of disease, injury, and disability. During the current Ebola outbreak, the CDC coordinated the return of two infected American aid workers for treatment in the US.

According to a press statement released by the Ministry of Foreign Affairs, Nourrice called for a similar institution to be set up for the African continent. He also encouraged solidarity and greater preparedness among African states, saying: “we must not allow ourselves to be taken by surprise again”.

“Ebola is not only a health issue but a serious threat to our economies, development and to the lives and livelihood of many communities,” he said in his address.

AU calls for travel bans to be lifted

According to Chinese news agency Xinhua, the head of the AU Commission, Dr Nkosazana Dlamini-Zuma, announced that AU member states had agreed for all travel bans between African nations to be lifted, saying that people should be able to move freely so that trade should continue between AU’s 54 member states.

She added that more effective measures need to be put in place for screening at border control points.

“Fighting Ebola must be done in a manner that doesn't fuel isolation or lead to the stigmatisation of victims, communities and countries,” said Dr Dlamini-Zuma.

According to the MFA statement, Ambassador Nourrice said in his address to the AU Commission that the temporary entry visa requirements were merely imposed as a preventative measure to assess and detect risks of transmission.

Responding to SNA in an e-mail, the Seychelles Public Health Commissioner Dr Jude Gedon said the country had taken note of the AU recommendations.

He emphasized that Seychelles had never imposed travel ban to any countries but did issue advisories which included asking for people to request for permission with the health authority if they have to visit countries where there are local transmission of Ebola.

Gedeon said the Public Health Authority has taken measures consistent with WHO recommendations.

"The measures that we are taking are the minimum we can do as a small and vulnerable island state to prevent the spread of Ebola here. WHO and all other agencies have given first hand information that the outbreak is out of control and border control are not working in the affected countries; and have warned that the outbreak will get worse before it starts getting better. They have also indicated that more countries in the region are bound to be affected...(.....).... our measures are not meant to affect trade and travel but rather to limit unnecessary ones. In fact, I would  say that they are helping to limit the spread of Ebola across the continent," said Gedeon.