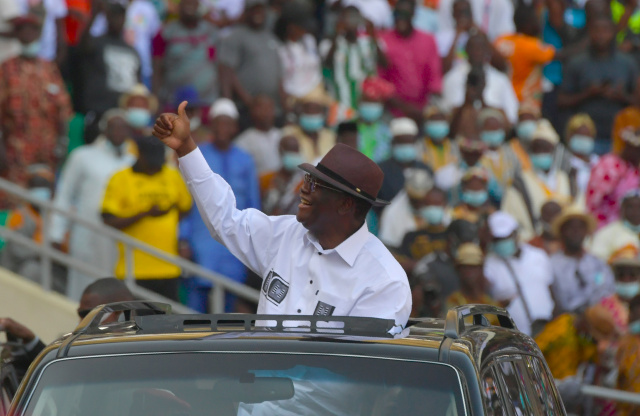 Ivory Coast President Alassane Ouattara gives a thumbs up to supporters during the inauguration ceremony of Ivory Coast's new 60,000-seat Olympic stadium, built with the help of China, in Ebimpe, outside Abidjan, on October 3, 2020 ahead of 2023 Africa Cup of Nations. (Issouf SANOGO / AFP)

(AFP) - A delegation of African and UN envoys on Wednesday expressed "deep concern" ahead of Ivory Coast's tense presidential election this month as it wrapped up a visit to the capital Abidjan.

Envoys from the West African regional bloc ECOWAS, the African Union and the United Nations met with government officials, the opposition and civil society as calls grow for a postponement of the West African country's October 31 vote.

Tensions are running high, with President Alassane Ouattara set to defy protesters who accuse him of flouting a constitutional limit of two terms in office.

"The joint mission expressed deep concern over the lack of trust among Ivorian political actors," according to a joint statement from the delegation led by Shirley Ayorkor Botchwey, Ghana's foreign minister and current chair of the ECOWAS Council of Ministers.

The delegation "strongly condemned the acts of violence and hate speech with ethnic overtones, which have unfortunately entered the field of political competition and are likely to have a negative impact on the progress made so far in the country," it said.

Violent demonstrations against Ouattara's candidacy have left around 15 people dead, reviving memories of a crisis that claimed more than 3,000 lives after disputed elections a decade ago.

Re-elected in 2015, Ouattara, 78, announced in March that he would not seek a third term.

But he changed his mind after his preferred successor, prime minister Amadou Gon Coulibaly, died of a sudden heart attack in July.

Ouattara and his supporters have argued that a 2016 revision of the constitution reset the term limit to zero.

The delegation called on the country's electoral commission "to continue meetings with the various candidates to find solutions to outstanding issues".

Of 44 applications to stand in the election, only four were accepted including that of Ouattara.

This week's mission was the second by the UN's special envoy for West Africa, Mohamed Ibn Chamba, who last month called for a "peaceful, inclusive, transparent and credible presidential election" after meeting with President Ouattara.

The International Crisis Group (ICG) last week called for the election to be postponed and for ballot preparations to be overhauled.

"The chances of this election spawning a serious crisis are high," the independent think tank said.