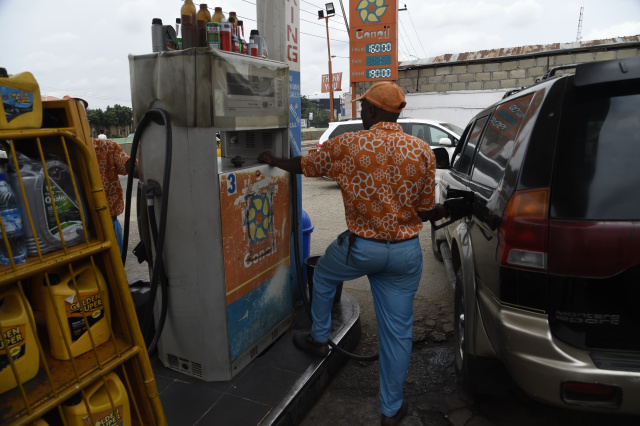 An attendant dispenses fuel into a vehicle's tank at a fuel station in the Maryland district of Lagos, on September 8, 2020. The Nigerian government has dumped a decade-long pricing regime for petrol and electricity allowing marketers to fix prices resulting in anger and tension in the oil-rich Africa's most populous country of 200 million people. (PIUS UTOMI EKPEI / AFP)

(AFP) - Nigeria plans a record budget as the country faces possible negative growth in the third quarter and slipping back into recession, the president told lawmakers on Thursday.

Africa's largest economy is being battered by the global economic fallout from the coronavirus pandemic as a drop in crude oil prices deprives it of key revenues.

"Revenue generation remains our major challenge," President Muhammadu Buhari said in a speech to a joint session of the National Assembly in the capital, Abuja.

"Our economy may lapse into the second recession in four years, with significant adverse consequences," he said

"However, we are working assiduously to ensure a rapid recovery in 2021."

The 77-year-old presented a record budget for 2021 of 13.1 trillion naira ($35.3 billion), which represents a more than 20 percent increase from last year's spending plan.

The budget, he said, comes with a deficit of 4.8 trillion naira that will be financed mainly by borrowing.

Buhari noted that global crude prices tumbled early in the year as the pandemic hit, falling below $20 per barrel in April and hovering around $40 since. The budget is based on a price assumption of $28 per barrel.

Africa » Be a reporter: Write and send your article » Subscribe for news alert
Tags: Nigeria, economy