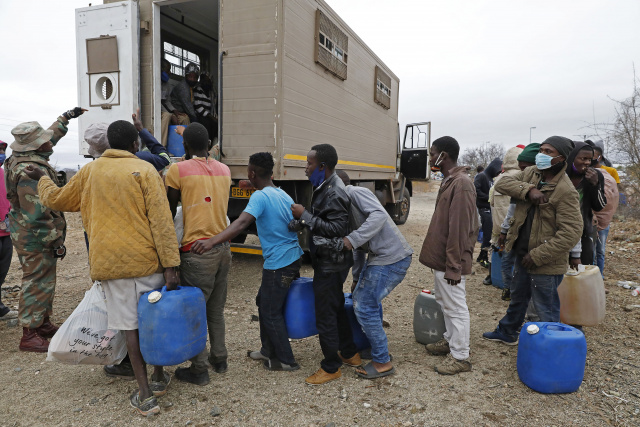 A South African National Defence Force (SANDF) member directs suspected undocumented Zimbabwean nationals into a vehicle after attempting to illegally cross the border fence to smuggle goods and fuel into Zimbabwe from South Africa near the Beitbridge border post, near Musina, on October 2, 2020. (Phill Magakoe / AFP)

About $345 billion in financing has not yet been pledged, Georgieva said in a speech, while commitments from official lenders and international institutions cover less than a quarter of the projected need.

"All of us -- countries and institutions -- must do more to support Africa to cope with the next phase, which is building a recovery from this crisis," Georgieva said.

The Washington-based crisis lender estimates Africa will see its GDP contract 2.5 percent in 2020, one of the worst downturns the continent has ever seen. And while recovery will begin next year, pre-crisis levels of growth won't be reached until 2022.

With private sector financing limited, the IMF projects a funding gap of $44 billion for this year alone, and 43 million people could be pushed into extreme poverty on the continent, wiping out five years of progress in poverty reduction.

The IMF has significantly increased its financial assistance to the continent, providing about $26 billion to more than 40 countries this year, while the World Bank has provided around $21.9 billion in loans.

African countries have more than a million cases of Covid-19 with 23,000 deaths, the IMF said.

General » Be a reporter: Write and send your article » Subscribe for news alert
Tags: IMF, Africa