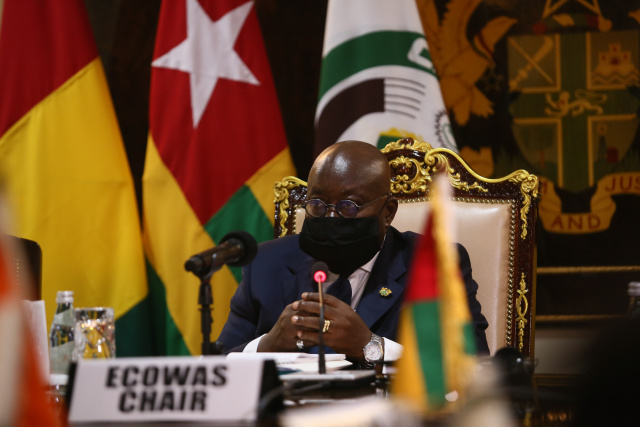 President of Ghana, Nana Akufo-Addo, is seen at the Economic Community of West African States (ECOWAS) meeting in Accra, Ghana, on September 15, 2020, as part of several efforts to resolve the political crisis in Mali. (Nipah Dennis / AFP)

The 15-nation ECOWAS ended its sanctions after Mali agreed to a transitional government on October 5 in the wake of the military rebellion that ousted President Ibrahim Boubacar Keita.

Akufo-Addo was met at the airport by Mali's interim president Bah Ndaw, a retired colonel.

The Ghanian leader will also meet with the interim vice president Assimi Goita, an army colonel who led the August putsch.

The colonels who overthrew Keita have pledged to return power to elected civilian leaders after a transition period of up to 18 months.

"Our country must return to full constitutional legality, with a President of the Republic elected within the prescribed deadlines, and if possible before," Ndaw said on Friday, reading a statement to the transitional government at the opening of its first Council of Ministers.

ECOWAS sanctions were lifted after Mali met its demands, including the designation of a civilian president and prime minister and the junta's accepting Goita would not replace the president if he was unable to continue.

Goita also released 11 civilian and military officials arrested during the coup, satisfying another request from the regional organization.

The August coup came as Mali struggles with a jihadist insurgency that has left large parts of the Sahel country outside the government's control and also inflammed ethnic tensions.