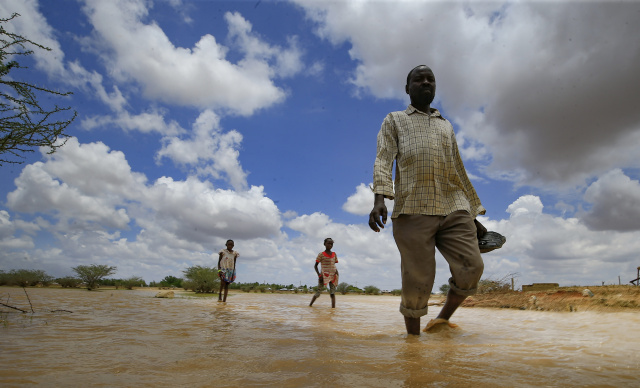 Sudanese men walk in flood water, as a result of flooding and torrential rain, in the town of Osaylat, 50 km southeast of the capital Khartoum, on August 6, 2020. (ASHRAF SHAZLY / AFP)

Because what the weather can do has proven increasingly devastating.

Over the past 50 years, the world has seen more than 11,000 weather-related disasters that have caused some two million deaths and cost the world economy around $3.6 trillion in losses.

And in recent decades especially, climate change has driven up the frequency, intensity and severity of such disasters, said the report, coordinated by the World Meteorological Organization (WMO).

It pointed out that in 2018, storms, floods, droughts and wildfires pushed 108 million people to seek help from the international humanitarian system.

By 2030, it estimated that this number could increase by almost 50 percent.

Early warning systems have proven vital to reducing risks from such disasters, highlighting how such systems have helped dramatically drive down disaster-related deaths in places like Bangladesh.

"Being prepared and able to react at the right time, in the right place, can save many lives and protect the livelihoods of communities everywhere."

The report urged countries to go beyond mere forecasting of weather events and to invest in so-called "impact-based forecasting" -- a system aimed to more effectively trigger early action based on the warnings.

Such systems strive to better understand and anticipate the likely human and economic impacts of severe weather.

But so far, less than 40 percent of WMO's 138 member states have set up such systems, the report found.

"This means that globally on average one in three people is still not covered by early warnings."

Unsurprisingly perhaps, the biggest gaps are found in the poorer countries, and in Africa especially, even when they list early warning systems as a "top priority".

And while the technological advances have been large in recent years, the systems adopted in many developing countries remain poorly suited to their needs.

Across Africa, for instance, only 44 percent of people in countries where data is available have any access to early warnings.

"An increase in climate-related disasters indicates that upscaling of adaptation investment across the board is required," especially in Africa, the report said.

The report provided more than a dozen examples of countries and regions that have reaped huge benefits from early warning systems.

In Bangladesh, for instance, where disasters like floods and cyclones have killed some 520,000 people in the past 40 years, alert systems have helped slash the death toll in recent disasters to a hundredth of tolls suffered in similar events a few decades ago.

In Europe, meanwhile, a wildfire alert system that cost less than 2.0 million euros to roll out has allowed the continent to avoid losses of between 255 million and 375 million euros annually.

And Australia has implemented an alert system for heatwaves, which the UN sees as the greatest climate-related challenge facing the world in the decades ahead, which has helped dramatically cut the number of excess deaths attributable to heat, the report found.

General » Be a reporter: Write and send your article » Subscribe for news alert
Tags: climate, UN