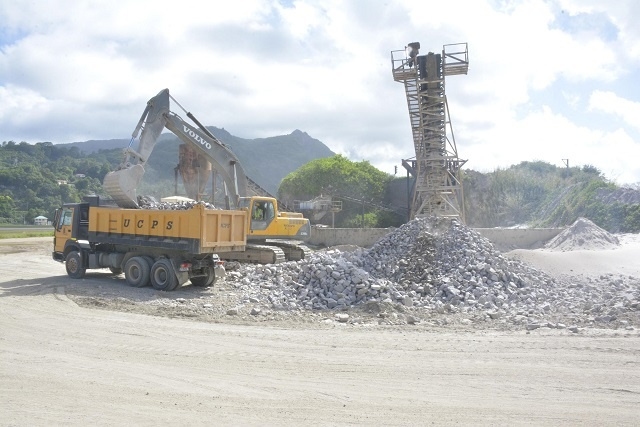 The current UCPS site at Anse Des Genets has a shortage of rocks needed to produce materials that go into construction.

(Seychelles News Agency) - An Environment Impact Assessment conducted on a proposed plan to develop a new quarry at Montagne Posee by a local company facing a shortage of raw materials is now in the public domain for inspection, a top environment officer said on Tuesday.

The United Concrete Products Seychelles (UCPS), one of the biggest construction material suppliers in the island nation, has been in negotiations with the government to obtain another suitable area for quarrying for the past 15 years.

A new area at Montagne Posee in the eastern district of Au Cap has been identified for a new quarry site for UCPS and a report is now available.

The Principal Secretary of Environment, Alain Decommarmond, told SNA that once the public inspection is completed "the report will return to us and we would see with the consultant if there are any amendments or new things that need to be incorporated."

The EIA report on the proposed quarry at Montagne Posee is available for public inspection at the documentation centre of the Department of Environment at the Botanical Gardens and the Au Cap District Administration office until Friday October 23 between 8 a.m. to 4 p.m.

The general manager of UCPS, Gregory Albert, said this is the second Environment Impact Assessment initiated by the construction company to assess the site.

"The first was conducted almost 20 years back. Since we have been advised by the authority that it was outdated, we had to do another one. In 2008 we even won a tender to access the place, but we have not received approval until now to exploit the site," said Albert.

He added that at the current site at Anse Des Genets, in the east of Mahe, there is a shortage of rocks needed to produce materials that go into construction.

"We have assessed the resources that we have and we found that it might last us for one and a half years. If we do not find a solution, which is a relocation, our biggest fear is that we would have to close down. Our employees will lose their job," said Albert.

He told SNA that currently the company extracts only 40 percent rock to work with, as the other 60 percent is soil and this is expensive and since it will take over two years to open a new quarry even if a new location is allocated, the company might have to close down.

Albert said that at this stage the company is "seeing how we can, in a partnership, quarry the area, allowing us to acquire rocks until the moment when we can move to the new quarry."

Ecologically minded villas to be built in Seychelles' Grand Bois