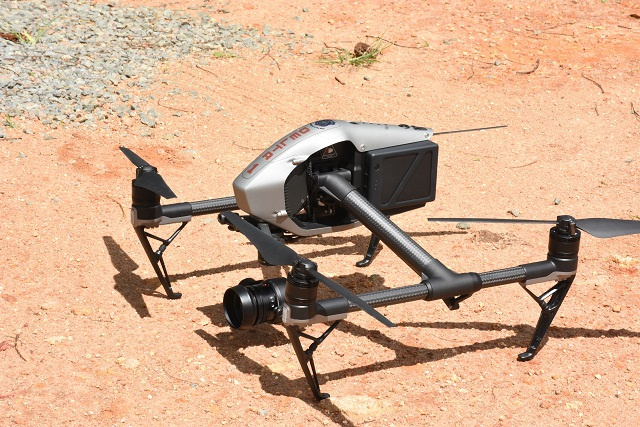 Called 'Eyes in the Sky,' the drone will act as a backup for security and complement security features such as the CCTV cameras already in place. (Jude Morel)

(Seychelles News Agency) - Prison officials in Seychelles now have improved surveillance capabilities after the introduction of a drone at the prison at Montagne Posee.

Called 'Eyes in the Sky,' the drone will act as a backup for security and complement security features such as the CCTV cameras already in place.

The superintendent of the prison, Raymond St Ange, told the press that since he started administrating the facility, he and his team have been using technology to help with surveillance.

"The drone is our eyes in the sky and it will help us identify people, not necessarily the prisoners, that we suspect are doing illegal things around the prison," said St Ange.

Coming at a cost of SCR134,000 ($7,400), the drone will help the prison team overcome traditional challenges where, without comprehensive data, ground teams contend with blind-spots and are exposed to unnecessary risks. The drone will minimise response time and provide live updates to the command centre as an event unfolds.

St Ange added that though the area around the prison has a dense forest, the camera on the drone is of superior quality and will do a great job when placed alongside other measures being taken.

"People could still camouflage themselves but it is for this very reason that we are clearing areas around the prison. We are not relying solely on the drone. We are extending our perimeter cameras as well and relooking at the areas that we place our lights. We are also developing a specialised canine unit," said St Ange.

To ensure that the drone is operated in a safe manner over the 4-hectare prison ground, the Seychelles Civil Aviation Authority (SCAA) has declared the airspace over the facility as a prohibited area.

"This means that no civil aviation activities are supposed to take place in this airspace. The prison can operate their drone at any given time provided they do not go beyond this airspace. For them to fly beyond the prohibited area, the prison will have to ask permission. SCAA already has mechanisms in place for such," said Louis Mancienne, the head of air traffic management at the authority.

During the launch, the superintendent also announced that the prison will be building a low-risk facility on the grounds of the prison. The facility, which will have a capacity to hold up to 60 people, will house compliant and aged inmates to help decongest the main male residence.

"Most of our prisoners at Montagne Posee are compliant. They participate actively in the Phoenix rehabilitation project. Being placed in the low-risk facility will depend on the offence they have committed and their behaviour in the prison," clarified St Ange.

There are currently about 270 inmates at the Montagne Posee prison.

"Through our discussions with the judiciary, we see that there are teenagers who are going through some rough situations and many of them are on probation. During that time, they break the orders and once this happened the judiciary needs a place to send these persons. We have been asked to prepare a facility to cater for this in the future," said St Ange.

Though the facility will not be located within the prison compound, it will be managed by the Seychelles Prison Service. The team will bring on board actors from the ministries of education, family, youth council, former teachers and health.

"It will be more of an educational facility where we will work on the behaviour of these teenagers so as to reprogramme them and make them understand what respect, responsibility and love is," said St Ange.

The facility will have the capacity to hold about 50 juveniles, mostly boys.