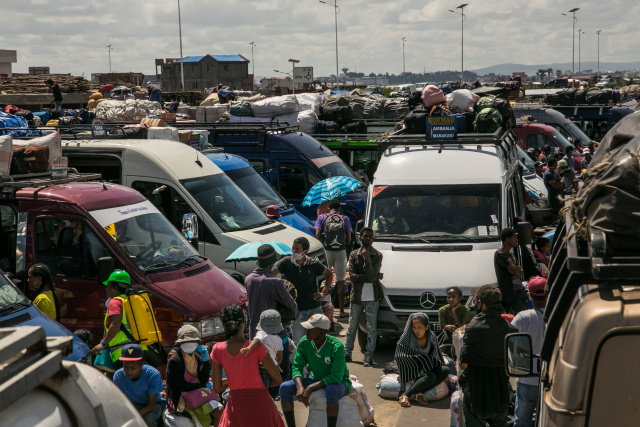 Several hundred people have gathered at the Maki bus station to take take buses to Madagascar's main cities, in Antananarivo, on April 7, 2020. Despite the confinement of Antananarivo, the authorities allowed the population to move around Between April 7, 2020 and April 9, 2020, by taxi or plane. (RIJASOLO / AFP)

(AFP) - G20 nations announced a six-month extension Wednesday to a debt suspension initiative for poor countries ravaged by the coronavirus pandemic, falling short of calls by the World Bank and campaigners for a full-year renewal.

The 20 most industrialised nations had pledged in April to suspend debt service from the world's most vulnerable countries through the end of the year as they faced a sharp economic contraction caused by the Covid-19 pandemic.

The initiative will now be extended until the end of June next year, G20 finance ministers and central bankers said after a virtual meeting as they also agreed on a "common framework" to individually deal with poor nations distressed by rising debt.

"We have agreed to extend the Debt Service Suspension Initiative by six months," Mohammed al-Jadaan, the finance minister of Saudi Arabia, the current G20 president.

In its final statement after the meeting, the group said the DSSI could be further extended until the end of 2021 when the IMF and World Bank meet next spring "if the economic and financial situation requires" the move.

"Given the scale of the Covid-19 crisis, the significant debt vulnerabilities and deteriorating outlook in many low-income countries, we recognise that debt treatments beyond the DSSI may be required on a case-by-case basis."

The group pledged to publish the common framework ahead of the G20 leaders summit in November.

The agreement on the framework marks a leap for China, a major creditor to poor countries that officials say has resisted attempts to write off debts.

"The G20 took an important step today, but it didn't go far enough," said Najat Vallaud-Belkacem, the France director of the ONE campaign.

"They could have extended the debt service standstill until the end of 2021, helping the world's poorest countries combat this global pandemic. They simply chose not to."

The World Bank on Monday said the debt of the world's 73 poorest countries grew 9.5 percent last year to a record $744 billion.

The countries' debt burden owed to government creditors, most of whom are G20 states, reached $178 billion last year, and China is owed more 63 percent of that.

"The tendency in past debt crises (was) for countries in debt distress to go through a series of ineffective debt reschedulings that leaves them weaker," said World Bank president David Malpass.

"Creditors may eventually allow them to get to a debt reduction process, but at a tremendous cost to the poor. We need to work better and faster this time."

The G20 framework "will facilitate debt write-downs when needed," Mnuchin said in a speech to the IMF and World Bank annual meetings.

"In a number of countries, debtors and creditors will need to work together expeditiously to restructure debt, in particular to unlock much-needed IMF financing," he said in the prepared statement.

Amid the economic crisis, extending the DSSI was the "bare minimum" the G20 could do, said Jaime Atienza of Oxfam International.

"Despite the common framework announced -- good news to deal with deep solvency problems but with details still unknown -- the failure to cancel debt payments will only delay the tsunami of debt that will engulf many of the world's poorest countries," Atienza added.

In April, the G20 indicated about 70 countries would be eligible for the DSSI. But last month, the group said it had received only 46 applications from eligible countries across the world, most of them from Africa.

The initiative has covered "a meagre 1.66 percent" of debt payments due in 2020 by developing nations, according to European Network on Debt and Development (Eurodad).

"Of the 46 beneficiary countries, it has had very limited impact due to the failure of private and multilateral lenders to participate," Eurodad said in a report that likened the initiative to "draining out the Titanic with a bucket".

The G20 announcement came a day after the International Monetary Fund said the global economy would contract 4.4 percent in 2020 and the damage inflicted by the pandemic would be felt for years.

Huge injections of government aid have kept economies from plunging further in 2020, but the continued presence of Covid-19 means the outlook is highly uncertain, the IMF said.