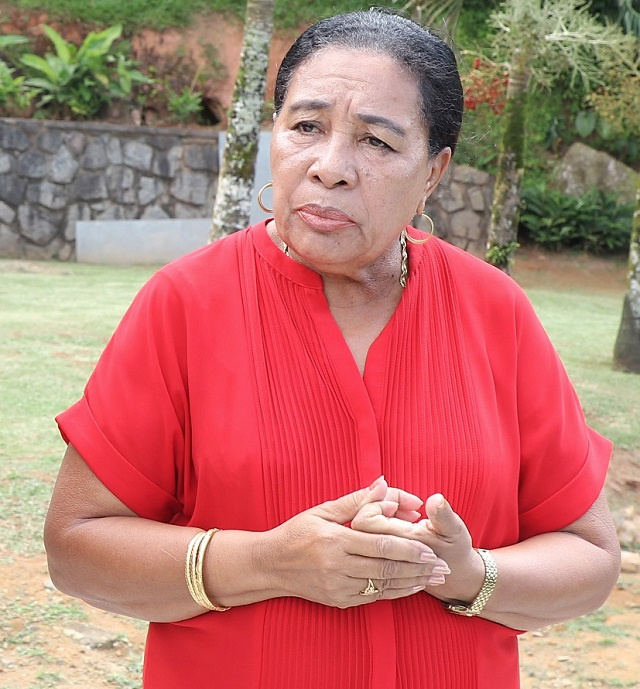 The 73-year-old former school teacher is seeking a second mandate as a Member of the National Assembly (MNA) in the upcoming legislative elections in October. (United Seychelles)

(Seychelles News Agency) - Ivy Edmond dreams of a day when women will stand beside men in the top leadership positions in Seychelles.

The 73-year-old former school teacher is seeking a second mandate as a Member of the National Assembly (MNA) in the upcoming legislative elections in October for the ruling United Seychelles party.

No stranger to the National Assembly election, Edmond was elected in 2007 to represent her district Plaisance under the administration of former president James Michel.

SNA met with Edmond to learn more on the reason for her comeback.

SNA: You are seeking another mandate as a Member of the National Assembly for your district a few years after you retired. What is the reason behind your return?

IE: Actually, I never retired. When I finished my mandate I worked as a political consultant at State House under President Michel for over six years. For the past two years, I have been manning the US office in Plaisance as branch chairperson, so that I could help the party remain in touch with its support base and the district as a whole.

Later the party asked me to participate in the 'primaries' to choose its candidate for the legislative elections and I readily accepted. I was elected out of three potential candidates.

SNA: How did you get involved in politics in the first place?

IE: My interest in politics started very early on. I was 16 at the time and some of our citizens had started the Seychelles Islanders United Party which was the predecessor of SPUP (Seychelles People's United Party). There were meetings held at some homes in Plaisance and I became interested. Then one day my mother told me that a man would be speaking at the Gordon Square and we should go and listen. That is when I first got to know of Mr. René. I liked what he was putting before us because at that time, there was a lot of poverty in Seychelles. Times were really hard for the vast majority. So I joined SPUP and began being active in politics.

SNA: Those who know you will say that you seemed to have always been in politics. Is that so or have you done other jobs?

IE: Believe it or not, I was a primary school teacher. I taught at Les Mamelles school and then Cascade school. Before standing for election for the first time in 2007, I worked for 15 years as the District Administrator (DA) for Plaisance. That was when I got to really know my district.

As a woman I am proud of what I have contributed to Plaisance because most of the housing programmes, the old people's homes and other developments were initiated when I was DA and I was working with the MNA at the time, Mrs. Charles first and then Mr. Meriton.

SNA: Tell us a bit about your time as a Member of the National Assembly?

IE: My time as MNA was really a period in which I really felt that I was directly impacting on the lives of the people in my district. Being MNA is not only sitting in the National Assembly and talking on issues, but it is also pushing for your constituents, it is understanding their needs and aspirations. It is taking a stance on things which affect the country as a whole and as such you have to put yourself second and the greater good first.

I was part of the women's committee in the National Assembly and we discussed issues which affect families and our social fabric. Those issues especially how drugs affect our young people, the situation of single parents, domestic violence, are the topics I concentrated on and still work to help eliminate. Plaisance is a district with many social problems but also a very vibrant youth population. If I get elected, I will do my best to help them hone their skills and achieve their potential.

SNA: Do you think there are enough women in politics in Seychelles?

Through the SPUP alongside other colleagues, I worked hard for women empowerment and it is something which I hold dear although our country has made huge progress in that area. On the other hand, we have to admit, many capable competent women tend to take a back seat and are unwilling to come forward

There are so many other things a woman has to consider before committing to a political career. You have to think about the sacrifices and if your family is a young one, then it is even harder. You have to balance what you want to attain versus its impact on your life, that of your children and your community. You have to be aware that you are no longer your own person and everything you do is subject to public scrutiny. In politics, you need to develop a thick skin and it is harder for the woman to do this I think. At the same time when we do decide to enter politics, we always make a positive impact.

SNA: What would you like to see in the future for women in politics?

IE: I dream of the day when we will see women leaders in the National Assembly. I am not talking about pushing the men aside, but standing alongside them as equals and helping them take this beloved country of ours to the next level. If elected, over the next five years I will dedicate myself to training another young woman to follow in my footsteps and keep Plaisance under the care of a woman MNA.