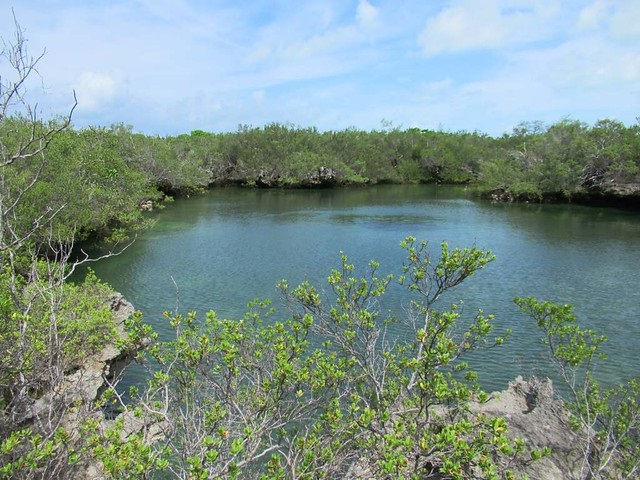 The atoll is 34 km long and 13 km wide with a large and shallow lagoon covering an area of 196 square kilometres larger than the island of Mahe. (David Stanley, Flickr) Photo License: CC-BY 2.0

(Seychelles News Agency) - Coral reefs in the lagoon of the Seychelles' remote Aldabra atoll recovered faster after the 2015-2016 bleaching event due to tolerance to heat stress, new research found.

The research indicates that high daily temperature fluctuations inside Aldabra's lagoon probably enhance the coral's tolerance to heat stress in these sheltered waters.

Anna Koester, one of the co-authors, said: "The results of our research show that rapid reef recovery is possible, and highlight that reducing local stressors to coral reefs can enhance their resilience against climate change."

Nancy Bunbury, consulting director of research and conservation of the Seychelles Islands Foundation (SIF) which manages Aldabra, said that coral mortality was not only substantially lower in Aldabra's lagoon but that lagoonal reefs also recovered their pre-bleaching coral cover and community composition within only four years after bleaching.

According to scientists from the National Oceanic and Atmospheric Administration (NOAA), the globally averaged temperature over land and ocean surfaces for 2015 was the highest among all years since record keeping began in 1880.

A local non-profit organisation, Nature Seychelles, said that the heatwave which spread from the western Pacific, hit the western Indian Ocean around February 2016 and in the Seychelles, the water temperature averaged 30 degrees Celsius for four consecutive months, peaking at over 31 degrees Celcius on some days.

Koester added that "the study also underlines the urgency to drastically reduce greenhouse gas emissions, as time periods between bleaching events are projected to become too short for recovery, even for highly protected and more resilient areas like Aldabra."

Coral bleaching is a phenomenon directly linked to the changing climate, the result of rising levels of carbon dioxide in the atmosphere. Reef-building corals in the tropics are colonial animals that are very sensitive to changing temperatures.

The chief executive of SIF, Frauke Fleischer-Dogley, said, "It is my firm belief that this specific research on Aldabra's coral reefs is of crucial value for not only the atoll and Seychelles, but at a global level."

She added that coral reefs are hugely impacted by climate change and only by understanding what makes the reefs resilient that "we can adapt our management practices and policies fully."

Aldabra's reefs serve as a benchmark since direct human impacts are extremely limited and therefore recovery rates are expected to be at their 'best' and can be used to calibrate the resilience and recovery of other reefs around the world.

With severe bleaching events expected to occur annually on 90 percent of the world's coral reefs by 2055, such research and long-term commitment to monitoring these valuable ecosystems are critical.

Aldabra - one of the world’s largest atolls - is a UNESCO World Heritage Site in Seychelles, an archipelago in the western Indian Ocean. It is home to a population of endemic giant Aldabra tortoises which fluctuates to around100,000 more than the 95,000 population of Seychelles. The atoll is 34 km long and 13 km wide with a large and shallow lagoon covering an area of 196 square kilometres larger than the island of Mahe