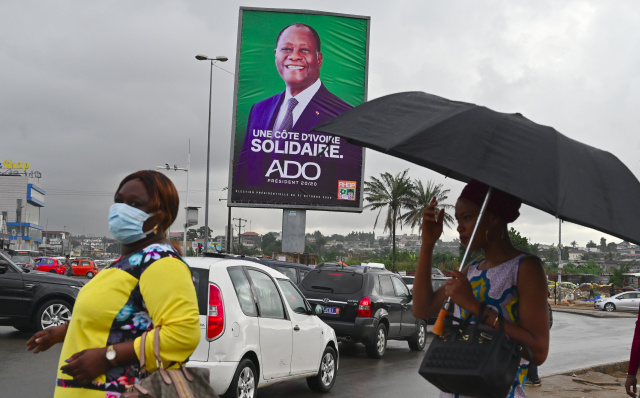 Residents walk past Ivory Coast's incumbent President Alassane Ouattara's campaign poster in street in Abidjan on October 15, 2020, on the first day of his presidential campaign ahead of the October 31, 2020 presidential elections. (Issouf SANOGO/AFP)

(AFP) - Ivory Coast's opposition on Thursday asked supporters not to take part in electoral events and campaigning in a fresh step towards a potential total boycott of a tense October 31 presidential poll.

Many observers fear a crisis may be sparked by the election comparable to the one in 2010-2011 when 3,000 people died and the West African nation was plunged into chaos.

"The electoral process under way does not concern us... we ask our supporters for an active boycott through all legal means," former prime minister Pascal Affi N'Guessan told reporters in a joint appearance with another leading opposition candidate, former president Henri Konan Bedie.

They did not say whether they would pull out of the election.

He also called for them "to prevent any operation linked to the ballot from being held."

There were no campaign posters for the opposition on display in the economic capital Abidjan on Thursday, while President Ouattara appeared on billboards with slogans deeming him "the best" for Ivory Coast, the country's youth and civil servants.

The constitutional council rejected a further 40 would-be candidates including ex president Laurent Gbagbo and former rebel leader Guillaume Soro, both of whom played key roles in the crisis that engulfed the country after disputed elections in 2010.

Gbagbo was freed conditionally by the International Criminal Court (ICC) in The Hague after being cleared in January 2019 of crimes against humanity during that crisis.

He is currently in Brussels pending the outcome of an appeal against the ICC ruling.

The opposition has cried foul over Ouattara's attempt to secure a third term in office despite a two-term constitutional limit.

After his re-election in 2015, Ouattara announced in March that he would not seek a third term. But he changed his mind after his preferred successor, prime minister Amadou Gon Coulibaly, died of a sudden heart attack in July.

Ouattara and his supporters have argued that a 2016 revision of the constitution reset the limit on the number of terms.

Demonstrations against Ouattara's decision to run again have turned violent and left around 15 people dead, reviving memories of the murderous crisis a decade ago.

Several high-profile figures, including Bedie and Affi N'Guessan, have called for "civil disobedience" in recent weeks.

"For us, the National Election Commission is no longer a competent body to oversee the election," said Maurice Kakou Guikahue, the number two of the historically dominant Democratic Party of Ivory Coast.

During the campaign, Ouattara is expected to point to his record on the economy and attempts to restore the world's biggest exporter of cocoa to its former position as a regional powerhouse.

Assoa Adou, the secretary general of the FPI faction Gbagbo or Nothing (GOR), called it a "fool's election".

Turnout among the 7.5 million people entitled to vote in a country with a total population of 25 million will be a key point, with observers fearing a high abstention rate.

Last week, a delegation of African and UN envoys expressed "deep concern" ahead of the vote.

Last month, the International Crisis Group called for a postponement and suggested political exiles be allowed to return to Ivory Coast.

General » Be a reporter: Write and send your article » Subscribe for news alert
Tags: ICoast, Vote