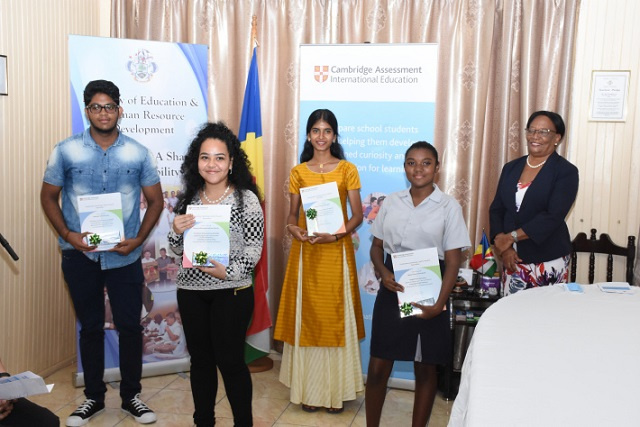 Four out for the five students who were rewarded for their achievements. (Louis Toussaint)

(Seychelles News Agency) - Five students who sat the IGSCE and A-level examinations last year were rewarded for their academic performances.

The Seychelles' Ministry for Education and Human Resource Development recognised the students' achievements in a ceremony, the best Cambridge Award Winners, on Thursday.

Abisheak Sathiyamoorthy came first in the best in the country category and was recognised for high achievement in the three subjects he studied at A-level, biology, chemistry and physics.

"I feel happy about winning the Cambridge awards. I got four A stars for mathematics, physics, chemistry and biology. I was first at the school for A level Studies, and best in Seychelles for all," said Sathiyamoorthy.

Sathiyamoorthy, who aspires to be a doctor or engineer, told the press that he believes that all students can achieve what he did, what is needed is motivation and dedication to their studies.

Sarojini Murugan and Pria Chavda came second and third respectively in the best in the country category. Alexandra Eulentin received the prize high achievement for A level sociology whilst Maeve Bonte was rewarded for coming top in Seychelles for the Chemistry IGCSE exams.

"Hard work pays, and that is why we are here, to be honoured in achieving these prestigious awards. I would like to encourage upcoming students to work hard and get even better results than us, and get more Cambridge awards," said Eulentin.

In all, Seychelles – 115 islands in the western Indian Ocean – received eight awards from Cambridge. In a normal situation, a representative would have flown in the island nation to give the awards to all the winners, but due to COVID -19, institutions were asked to do their own presentation. The ceremony on Thursday at the ministry's secretariat was for students from public schools.

The principal secretary for primary and secondary education, Odile Decomarmond, said that the best students are determined by Cambridge's own sets of criteria and are country-specific. This year only five students from the public school were awarded.

"We always believe that you have to push to increase performance and this is always our effort. It is not always that you get a good cohort which gives good grades. We need to continuously work hard to improve grades and we do have strategies in place to help. But as you know a strategy does not yield results overnight but will take some time," explained Decomarmond.

According to the principal secretary, the results for the last couple of years are more or less the same but in 2018 a Seychellois won the Top in The World award for economics.