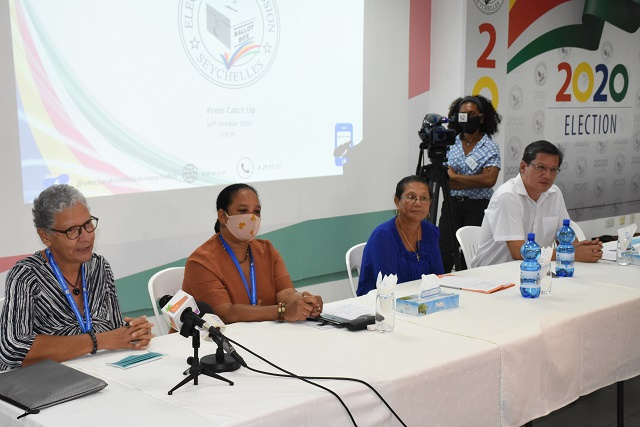 Details on polling stations were given at a joint press conference of the Electoral Commission and the Ministry of Education. (Seychelles Nation)

(Seychelles News Agency) - Twenty-five educational institutions will be used as voting stations in the presidential and legislative elections in Seychelles October 22-24, a top official said on Friday.

The principal secretary of Education, Odile Decommarmond, told a press conference that out of the 25, two will be used as special stations for voting on Thursday 24 -- English River crèche and Baie St Anne Praslin Primary School.

"The special stations will be prepared a day before voting takes place. For that reason, we are closing the schools at 1 o'clock. The rest of the institutions will be used for voting on Saturday 24 and they will be closed on Friday 23 for preparation," said Decommarmond.

She said that students at secondary level are doing their IGCSEs and it has been agreed that the rooms they are using will not be interfered with.

Decommarmond added that there are still some minor preparation works that need to be done with some stations before actual voting takes place.

The presidential and legislative elections in Seychelles, an archipelago in the western Indian Ocean, will take place from October 22-24. About 70,000 people are eligible to vote.

Candidates from three political parties -- Linyon Demokratik Seselwa (LDS), United Seychelles (US) and One Seychelles -- are contesting the presidential elections. For the National Assembly, LDS and US have candidates in all 26 districts while One Seychelles has 18 and Lalyans Seselwa three.

The chairman of the Electoral Commission, Danny Lucas, said that the commission has received a lot of support from the Ministry of Education, especially when it came to organising the stations for people to vote in alphabetical order.

"There would be 80 streams and an average of 957 voters per stream. This shows the number of classrooms needed for the exercise," said Lucas.

He added that the English River crèche special station will be used on Friday 23 by people working in essential services who will be at work on the main election day which is Saturday 24.

Additionally, there would be other special stations set up, one at the Old People’s Home at North East Point for voting on Thursday 22, and another for remandees at the Remand Centre at Bois De Rose and one at the quarantine centre at Beau Vallon Bay.

Lucas said that a team of 10 members from the Eastern Africa Standby Force (EASF) who arrived last Friday will be the only group of international observers for the election. The mission consists of observers from Kenya, Ethiopia, Somalia, Burundi, Sudan and Uganda.

As per the local public health requirement put in place amid the COVID-19 pandemic, all observers will serve a 14-day quarantine period at the Berjaya facility with strict adherence to the public health protocol.