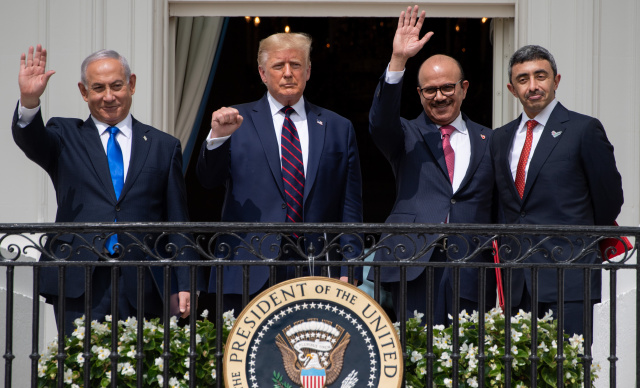 (FILES) In this file photo taken on September 15, 2020, (L-R)Israeli Prime Minister Benjamin Netanyahu, US President Donald Trump, Bahrain Foreign Minister Abdullatif al-Zayani, and UAE Foreign Minister Abdullah bin Zayed Al-Nahyan wave from the Truman Balcony at the White House after they participated in the signing of the Abraham Accords where the countries of Bahrain and the United Arab Emirates recognize Israel, in Washington, DC. Brandishing a sword and dancing to traditional music on his first visit to Saudi Arabia soon after taking office, Donald Trump launched a dramatic relationship revamp that freed the hands of the Gulf monarchies. More than three years on, regional leaders are playing their diplomatic cards in support of an erratic but valuable partner in Washington as he seeks a second term - one that would likely lead to even deeper tensions with Iran and more opportunities for their one-time enemy, Israel. (SAUL LOEB / AFP)

(AFP) - A United Arab Emirates delegation left on the country's first official visit to Israel on Tuesday, with a string of deals set to be signed after the two countries signed a deal to normalise ties last month.

With their economies hard-hit by the coronavirus pandemic, the UAE and Israel are hoping for rapid dividends from their normalisation deal -- which broke years of Arab consensus that there should be no relations with the Jewish state until it makes peace with the Palestinians.

According to an Israeli government statement, the two sides are expected to sign agreements on aviation, investment protection, visa exemptions, and science and technology.

The two governments are also due to sign an agreement authorising 28 commercial flights a week between the countries, an Israeli transport ministry official said.

US Treasury Secretary Steven Mnuchin, who attended a business dinner with Emirati and Israeli officials in Abu Dhabi on Monday, accompanied the delegation on the Etihad Airways flight.

She added that the UAE delegation was headed by the minister of state for financial affairs, Obaid Al Tayer, and Economy Minister Abdulla bin Touq Al Mari.

The UAE and Israel signed a US-brokered deal to normalise ties at the White House on September 15, marking the first such deal with a Gulf state.

Bahrain followed suit in a ceremony on Sunday after a similar US-brokered agreement, joining the pact known as the Abraham Accords.

"The Abraham Accords signed by the UAE and Israel built and improved upon the agreement by transforming the regional security environment as well as driving economic prosperity for all the nations involved," Mnuchin said at Monday's dinner.

He had earlier held talks with senior Emirati officials on the "promising opportunities for cooperation awaiting the two countries", the official WAM news agency reported.

The Emirati and Bahraini governments ratified their agreements with Israel on Monday, state media reported.

The UAE and Bahrain are only the third and fourth Arab states to normalise ties with Israel, following Israel's 1979 peace deal with Egypt and a 1994 agreement with Jordan.

He will then host a meeting with Mnuchin, President Donald Trump's special assistant for international negotiations Avi Berkowitz and Emirati officials, it added.

General » Be a reporter: Write and send your article » Subscribe for news alert
Tags: Israel, UAE