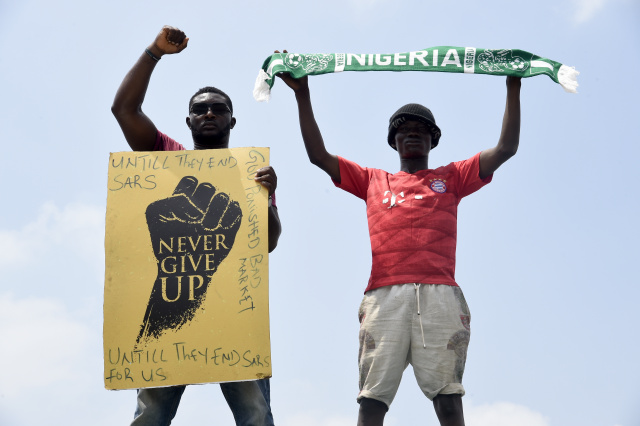 A protester gesture while holding placard as another holds up a scarf with the colours of the Nigerian national flag during a demonstration to protest against police brutality at Magboro, Ogun State in southwest Nigeria, on October 20, 2020. Authorities declared a 24-hour curfew in Nigeria's economic hub Lagos on October 20, 2020, as violence flared in widespread protests that have rocked cities across the country. (PIUS UTOMI EKPEI / AFP)

(AFP) - Authorities on Tuesday imposed an indefinite curfew in Nigeria's economic hub Lagos as the police ordered out anti-riot units nationwide to face protests officials claimed had been hijacked by criminals.

As the lockdown went into force in Africa's largest city at 4 pm (1500 GMT), hundreds of defiant protesters sang the national anthem as they pledged to remain out on the streets.

"Are you afraid?" a man shouted to the flag-waving crowd from a stage at a tollgate in the city centre that has become the epicentre of the demonstrations.

"We will stay here peacefully," 32-year-old demonstrator Akin told AFP. "This is our new home."

The government initially said it would impose a 24-hour curfew in Lagos. A spokesman for the city later clarified to AFP that it was indefinite and around the clock.

By early evening, silence fell on large parts of the usually bustling city, shops were closed and cars had gone.

Protests that began 12 days ago over abuses by the police's loathed Special Anti-Robbery Squad (SARS) have spiralled dramatically with violence being reported in several cities.

Lagos state governor Babajide Sanwo-Olu ordered the shutdown after he said the protests had "degenerated into a monster that is threatening the well-being of our society".

"Lives and limbs have been lost as criminals and miscreants are now hiding under the umbrella of these protests to unleash mayhem," he wrote on Twitter, insisting that only essential workers should stay out on the streets.

"We will not watch and allow anarchy in our dear state."

As the tone hardened from the authorities, Nigeria's police chief ordered anti-riot units deployed around the country.

"The force will henceforth exercise the full powers of the law to prevent any further attempt on lives and property of citizens," a statement said.

Some 18 people have died in the demonstrations as clashes have been reported between protesters and assailants wearing civilian clothes.

Rights groups and protesters have accused "thugs and sponsored hoodlums" of attacking the peaceful demonstrations and seeking to discredit the movement.

Lagos, a city of 20 million, has been paralysed as crowds have blocked key roads and access to the international airport.

Witnesses told AFP that a police station was set ablaze in the Orile Iganmu district of the city on Tuesday. They said police opened fire on protesters, wounding several.

In the capital Abuja, security forces violently dispersed crowds and thick black smoke could be seen over the city, an AFP photographer said.

Tensions were high after police reported that three people had been killed in clashes in the city on Monday.

Violence spread as well to the largest northern city of Kano as hundreds of people went on a rampage on Tuesday, burning vehicles and looting businesses according to an AFP reporter at the scene.

"The mob came near the school and began assaulting parents who had come to pick up their children," 35-year old auto mechanic Sadiq Mohammed told AFP.

The wave of protests in Nigeria has rattled the authorities as the biggest show of people power in years has turned into demands from youths for sweeping changes.

The government announced the scrapping of the SARS unit and a raft of reforms over a week ago, but the bid to placate the protesters has failed.

Officials have called for the demonstrations to be suspended to give the authorities time to make good on its pledges.

Nigeria -- where the median age is 18 -- is a tinderbox of profound economic and social grievances.

Around half of the population of 200 million is estimated to live in extreme poverty and unemployment is widespread among the youth.

Africa's biggest oil producer is currently facing a recession as the fall in crude prices sparked by the coronavirus pandemic has battered government finances.

The Lagos Chamber of Commerce said in a statement that estimated economic losses in the past 12 days were at 700 billion naira ($1.8 billion dollars, 1.5 billion euros).

On Tuesday, the Senate called on President Muhammadu Buhari to address the nation on the protests "as a matter of urgency".

"The upper chamber urged the Federal Government to faithfully implement all the five demands of the #EndSARS movement and protesters with necessary timelines to rekindle confidence in government," lawmakers said in a statement.

Africa » Be a reporter: Write and send your article » Subscribe for news alert
Tags: Nigeria, demonstration