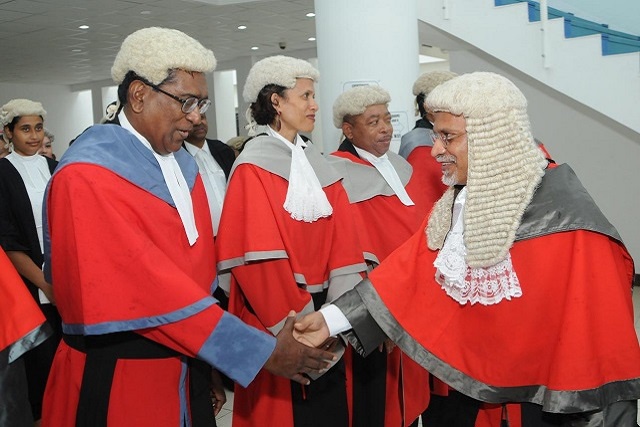 (Seychelles News Agency) - One of the Seychelles judiciary’s most time-honoured traditions was stopped in its tracks yesterday due to inclement weather. Heavy rains lashing the capital city of Victoria on the main inhabited island of Mahé meant that the annual march by the powdered wigs of the judiciary, laden with pomp and ceremony, could not go ahead this year.

The procession from State House to the Supreme Court, situated at the ‘Palais de Justice’, Ile du Port, usually takes place before the re-opening of the Supreme Court after their annual six-week shutdown.

The ceremonial re-opening of the Supreme Court can be traced back to the beginning of the 20th century, when the Seychelles became a British colony in 1903.

This year, after the traditional mass held at the Cathedral of Immaculate Conception, the procession was cancelled and the members of the judiciary were transported straight to the Supreme Court for the remainder of the re-opening ceremony.

Another tradition which has fallen away this year was the reading of the annual statistics on criminal and civil cases, which has been permanently cast aside due to the annual report now being available on the Seychelles judiciary’s website, www.seylii.org.

Acting Chief Justice, Durai Karunakaran, said that the reading of the statistics appeared to be outdated.

“This good tradition has now become redundant. It is no longer relevant today,” he stated. “Since 2011, we have embraced a new digital tradition of publishing a detailed Annual Report containing all these statistics and details.”

“I am proud to say that this is one of the fruits we realized from the implementation of our First Five Year Strategic Plan 2010‐2014,” he added.

Acting Chief Justice Karunakaran paid homage to his predecessor, former Chief Justice Fredrick Egonda-Ntende, who for the past five years had been presiding over the re-opening of the Supreme Court.

Chief Justice Egonda-Ntende completed his five-year contract with the Judiciary of Seychelles at the end of August and has since returned to his home country of Uganda to assume his judicial office as a Justice of the Court of Appeal.

“His tenure here has clearly demonstrated that we have the capacity to change, and that our work here has the potential to attract both local and international acclaim,” said the acting Chief Justice.

Despite the Ugandan judge’s departure, the independence of the Seychelles judiciary was bolstered in May this year by the arrival of a new Supreme Court Judge, Justice Akiiki-Kiiza, who also hails from Uganda.

The Seychelles judiciary currently has eight judges in total, five of whom are Seychellois. Additionally, there are also five magistrates serving in the Magistrate’s Court.

“To achieve these laudable goals, we need our partners including the other two branches of government, the Bar Association, civil societies, and the NGOs to play their part,” he said. “It is paramount to ensure that everyone comes together in unity and that the fundamental principles underlying our Democratic Constitution govern and guide us in preserving the basic structure of our Constitution and in the administration of justice.”

Remarking on the prevailing political focus in government towards unity and reconciliation, the acting Chief Justice called for the judiciary to unite and work together to revitalize the justice system into a centre of judicial excellence for the region.

“Freedom is not free”

The acting Chief Justice warned that true freedom for all carries weighty responsibilities.

“You and I are free today because some people have paid the price at some point in time, and have sacrificed their lives and freedoms so as to gain freedom for us,” he explained. “Freedom is an indivisible word. If we want to enjoy it and protect it, we must be prepared to extend it to everyone, whether they are rich or poor, whether they agree with us or not; whatever be their racial, sexual, cultural, political, and religious orientation.”

Congratulating the media in Seychelles for adopting a Code of Conduct, Acting Chief Justice Karunakaran welcomed the development as a complementary step to the judiciary’s recently adopted Codes of Conduct for the Bench and the Bar.

“An independent and responsible media shines light on corruption, inefficiency, and abuse of rights, and provides invaluable information to the public about the functioning of the essential organs of the State. It reports reliably and accurately, which enhances its professionalism, credibility and trustworthiness.”

Acting Chief Justice Karunakaran reminded the media that the term ‘freedom of expression’ was neither a license to infringe upon the rights of others nor to broadcast ‘hate speech’, urging members of the media in Seychelles to promote unity and social harmony by utilising “constructive criticism”.

The acting Chief Justice said that a modern judiciary could only earn the respect of the public by making itself accountable, independent and transparent. He further acknowledged the public’s right to constructively criticize the courts’ performance, functioning and judgments.

“In the last five years, we have shown our genuineness as to transparency,” he continued. “You have witnessed a sea-change in the level of transparency in the basic operations of our courts. It is now incumbent on us to carry that momentum forward into our next Strategic Plan, which will span 2015 to 2019.”