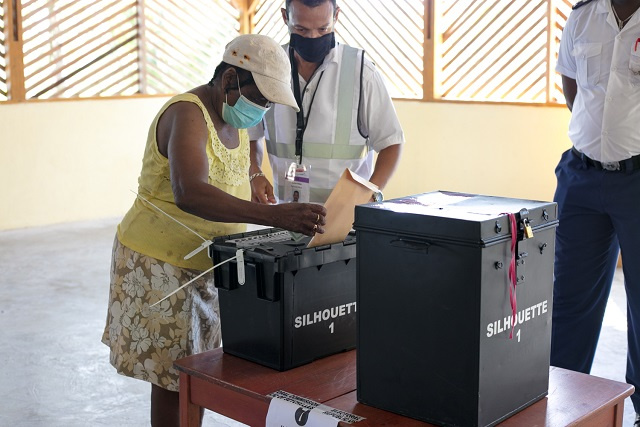 (Seychelles News Agency) - The polling station on Silhouette island opened just after 9 a.m. on Thursday to register the votes of some of the very first ballots cast in Seychelles' three-day presidential and National Assembly election that opened Thursday.

The first voter in line, Modestine Magnan, an 81-year-old inhabitant of Silhouette, said that the voting process went well.

"I am praying that all goes well during these days of voting," said Magnan, who is the oldest inhabitant of the island.

The Electoral Commission made provisions for Seychellois living and working on inner and outer islands to vote at Silhouette, Farquhar, Coetivy, and Poivre on the first day of voting.

Electoral officers along with the representatives of the candidates, the police and observer missions, where possible, have been travelling by plane and boat to the different islands to allow people to vote since early Thursday.

The people who were expected to vote on Silhouette included people working on the island with the Islands Development Company (IDC), Island Conservation Society (ICS) and Hilton Labriz and North Island Resort.

An employee of the Island Conservation Society (ICS), Dillys Pouponeau, 24, told the press that voting on Silhouette is different from the Grand Anse Praslin district she had registered to vote in.

"It takes much less time to vote here. For me to go to Praslin, I would have had to pay for a ticket and would have had to wait in a long line. Since I never participate in political activities, I am not missing out on anything," she said.

Another voter in line, David Johnny, said that "the process was fast but due to COVID-19, more caution had to be taken."

Justin Mathiot, the electoral officer in charge of the station, told the press that "the process went well and until now we have not encountered any problem. Voting is flowing and things are going as we had predicted."

Though Silhouette is part of the Inner Islands, it is also an all-station meaning anybody living in any district can vote here.

"Hence it is important that when these people vote, the ballot is placed in an envelope on which we write the district in which they are registered. The ballot boxes will be sent to the headquarters of the Electoral Commission where they are going to sort out the envelopes on Friday evening according to the districts the people are registered in," added Mathiot.

Observers working at the station, journalists covering the event and representatives of political parties had the chance to vote at Silhouette.

The vice-presidential candidate for Linyon Demokratik Seselwa (LDS) -- Ahmed Afif -- and the leader of United Seychelles (US) -- Vincent Meriton -- both cast their votes.

"I find that the procedures were quite well organised. I would like to congratulate the Electoral Commission that has brought together a professional team that has ensured all regulations are followed. Voting on the island is a little more complicated than voting on Mahe as on Mahe you do not have to vote in an envelope. However, it went pretty fast, about a minute long," said Afif.

On his part Meriton told the press that "the process went well, allowing people to carry out their constitutional right in peace, security and order as the Commission asks."

Also present was the presidential nominee for One Seychelles, Alain St Ange. He will cast his vote at Les Mamelles on October 24, the main day of voting for the three main islands, Mahe, Praslin and La Digue.

There are 74,634 eligible voters to cast ballots in the presidential and National Assembly elections in Seychelles, an archipelago in the western Indian Ocean, October 22-24.