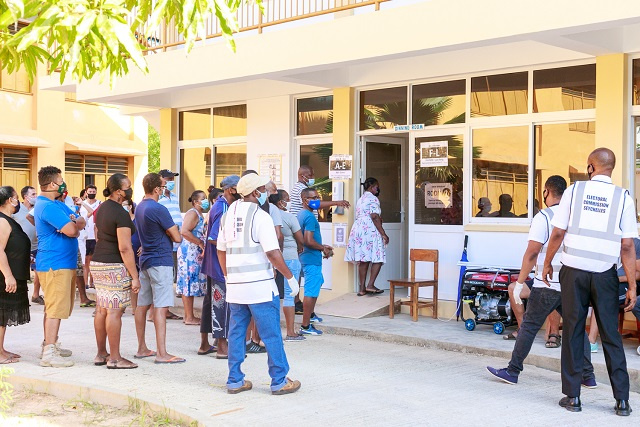 Three candidates are running for President: Wavel Ramkalawan of Linyon Demokratik Seselwa (LDS), Danny Faure of United Seychelles (US) and Alain St Ange of One Seychelles.

Seventy-three candidates from four political parties and two independent candidates are running for a seat for National Assembly.

With the recognition of Perseverance a new district in 2015, this year voters will cast ballots in 26 districts on the three main islands, Mahe, Praslin and La Digue. Doors to the stations opened at 7 a.m. and are expected to close at 7 p.m. local time.

In the southern district of Baie Lazare, 2,700 people are eligible to vote.

At around 6 a.m. the electoral officer in charge, Russel Finesse, told SNA that "all preliminary preparations and counting of ballot papers had bee done."

Around 200 voters were already lining up for the opening of the station that happened at 7.03 a.m.

The first person to cast his vote was 58-year-old Archange Figareau.

"I got here at 4.30 a.m. and calmly waited for the station to open. I chose to come this early because I have to go to work later. I made sure to carry out my constitutional right," said Figareau.

A first-time voter, Tara Mondon, said she did not get involved in all the hype that surrounded this election and that "all parties gave their best and I am hoping that the decision I make today is a good one and will be in the benefit of my family and all Seychellois."

LDS and US both have candidates standing in all the 26 districts on the three main islands of Mahe, Praslin and La Digue. One Seychelles has 18 candidates whereas Lalyans Seselwa has three. There are two independent candidates -- one each in St Louis and Beau Vallon.

A special station at the National House in the capital Victoria opened from 8 a.m. and will close at midday for voters from other islands working or temporarily on Mahe, the main island.

The station at Anse Boileau, a western Mahe district with the fifth largest number of eligible voters -- 3,398 -- opened at 7.05 a.m.

"We managed to sort out a small issue that had to do with verification of ballot papers. We showed everybody present the empty ballot boxes before they were sealed and just at 7.07 a.m. the first vote was cast," said the electoral officer in charge, Donald Zialor.

Present at the station were two candidates for the National Assembly, Philip Arissol of LDS and Roger Alphonse of US. They both told SNA that the process was going smoothly and a common understanding was reached in regards to the issue that arose.

Still in the west, Grand Anse Mahe voting station with 2,478 voters, opened at 7.30 a.m. and people waiting in long queues were frustrated.

A first-time voter, 18-year-old Stucy Louise, told SNA that when she got to the station at 6 a.m. queues were already long.

"People were complaining outside the gate and when the gate opened, people who had come last went in first before those who were already here," said Louise. She added that despite this, once voting started, the process was fast. Louise cast her vote at around 8.15 a.m.

The electoral officer in charge, Francoise Mein, said the team got to the station early in the morning but encountered some delays with logistical preparation.

"The station opened with a delay of 30 minutes. I had to carry the same processes in the two different classrooms that people are voting in today before opening the station. As per the law, we had to recount all the ballot papers that we were issued. Despite this, voting is going quite fast and according to the last count at 8.10 a.m. around 80 people had already cast their votes in the two classrooms," said Mein.

She pointed out that she did not yet have the list of people who voted at special stations.

She said that there are systems in place that will allow her officers to know if a person who has already voted attempts to do so again, adding that this is an offence before the law.