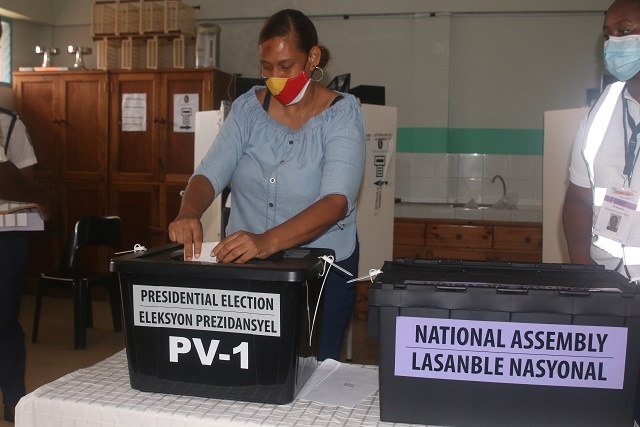 Amesbury said all 26 voting stations were open at midday and voting was going well and quite fast. (Joe Laurence, Seychelles News Agency)

(Seychelles News Agency) - Around 32 percent of eligible voters in Seychelles had cast their ballots by 12 noon on Saturday, the main voting day, in the presidential and National Assembly elections, said a top official of the Electoral Commission.

The chief electoral officer, Manuella Amesbury, told the press that the Commission is really satisfied with the rate of early voting; 24,132 people had voted according to the figures received from all polling stations.

Nearly 75,000 voters in the island nation in the western Indian Ocean could cast ballots to select among three candidates running for President: Wavel Ramkalawan of Linyon Demokratik Seselwa (LDS), Danny Faure of United Seychelles (US) and Alain St Ange of One Seychelles.

There are also 75 candidates vying for a seat in the National Assembly, 26 each from LDS and US for all districts on Mahe, Praslin and La Digue. One Seychelles has 18 candidates whereas Lalyans Seselwa has three. There are two independent candidates -- one each in St Louis and Beau Vallon

Amesbury said all 26 voting stations were open at midday and voting was going well and quite fast.

She added that there has been an improvement in the way voting is taking place compared to the first two days of voting Thursday and Friday October 22-23 and that is "because today we are using registers for electoral areas."

The chief electoral officer confirmed that there have been a few concerns reported and of is the stations that opened later than 7 a.m.

"For example, we have a station which opened at 8 a.m. The law says it should open at 7 a.m. Of course now the station will close an hour later to cover the delay. Our observation this morning is that we have many people voting in the morning and now there are areas that are empty so I will ask people to come down and exercise their civic right early so that voting can finish early," said Amesbury.

"We've also encountered a few cases where some people who did not register to vote are turning up to cast their ballots and others are coming with driving licenses which were not one of the required documents. But our mandate is to ensure that the majority of people can vote so for us these are normal issues," she added.

There have also been complaints about illegal gathering close to voting stations.

"We are working closely with the police... All complaints are sent to our complaint mechanism and we forward them to the police. So there is a joint collaboration," she said.