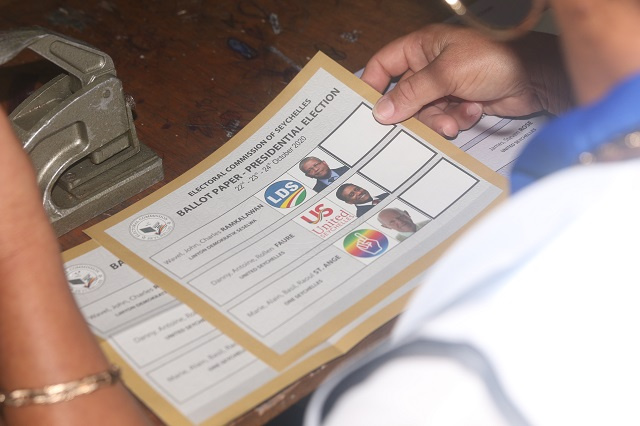 Leaders contesting the presidential election in Seychelles said Saturday that they hope the process is fair and peaceful and that the country respects whoever is elected as the new president of the island nation.

The three candidates - Wavel Ramkalawan from the Linyon Demokratik Seselwa (LDS); Danny Faure, the incumbent president of United Seychelles (US); and Alain St Ange of One Seychelles – spoke at their respective constituencies.

First to vote as his station opened at 7 am was Faure, who voted at Beauvallon a district in the north of the main island of Mahe. The outgoing president said he chose to vote early as he planned to during the day visit other voting stations.

“As I have always said I am convinced that I will win this election. But if the voting population decides otherwise, as you know I have always had confidence in the Seychellois voters and I have great respect for the wish and choice of the people of Seychelles. Automatically I am a person who will respect the decision and volition of the people of Seychelles,” said Faure.

Faure added that he hopes that these elections will allow Seychelles to be an example for the rest of the world where democracy is concerned. Faure became president in October 2016 but had held various ministerial portfolios under both his successors France Albert Rene and James Alix Michel.

The presidential candidate for the One Seychelles party was the second to cast his vote in his district of Les Mamelles. St Ange explained that he started his day on La Digue – the third most populated island of the Seychelles – 115 islands in the western Indian Ocean. St Ange also served under the Michel and Faure administrations where he as a minister.

St Ange noted that the electoral commission has encountered some challenges especially on the main day of polling where in some district the process started late.

“For us as One Seychelles, we have always said all Seychellois have the right to vote. As a country we should be looking at all opportunity for them to exercise their rights, it is important for us to learn through this election so that in five years we should know what to do,” said Ste Ange.

St Ange expressed his dismay that six Seychellois from Aldabra could not vote on Friday, and added that better planning should have taken consideration of the rough seas and alternatives should have been made for the group who were deprived of their rights.

The former leader of the opposition, Wavel Ramkalawan, cast his vote shortly before noon on Saturday. Ramkalawan had started his day by visiting polling stations on the inner islands of Praslin and La Digue, before returning to the main island for other visits.

Ramkalawan said that so far, the process is going very well and has commented the work of the Electoral Commission which he said was doing a good job despite difficulties with special stations on the first two days of polling.

The presidential candidate, however, warned that any irregularities with the process will be recorded and reported.

Saturday is the main day for voters to cast their ballots in the three most populated islands of Seychelles, Mahe, Praslin and La Digue, where voting stations are from 7 a.m to 7 p.m.