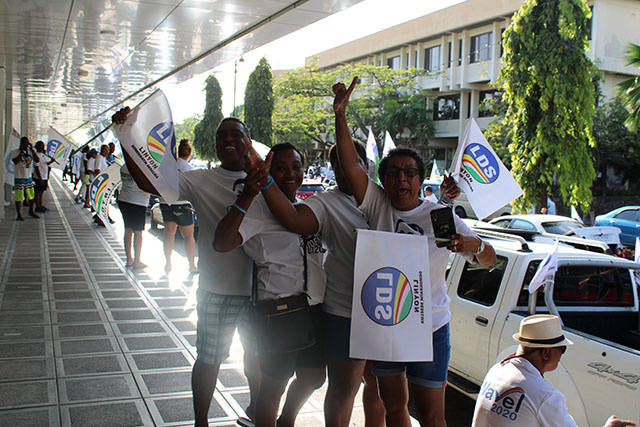 (Seychelles News Agency) - Following a landslide victory in the country's presidential and legislative elections, supporters of the political party Linyon Demokratik Seselwa (LDS) took to the streets on Sunday to celebrate an overwhelming victory.

The former opposition party is now the party in clear control of the island nation, sweeping to power in the president's office and the National Assembly.

The outgoing President Danny Faure won 28,178 votes or 43.5 percent. This is his party's first defeat at the top office since 1977 when it came to power through a coup d'etat. It has dominated the island's political landscape for the past 43 years.

Newly elected member of the National Assembly for Mont Fleuri, a central Mahe district, Michel Moumou said he was confident he would win as he had campaigned for the past three years and was happy that the Seychellois people voted for him.

"My team was always welcomed by the people in our district and you could tell they wanted to see a change of government. I am happy that we have been able to convince them to support us as we are offering something better for Seychelles," said Roucou.

For Patricia Julie, the victory is the culmination of so many years of fighting for change.

"I did not do it for me but for my children and grandchildren because we were tired of the existing system," said Julie.

Her comments were echoed by Francois Bijoux who said he was victimised under the government of the Seychelles People's Progressive Front (SPPF), which later changed to Parti Lepep and now United Seychelles.

An emotional Bijoux dedicated the victory to his mum, who has since passed and whom he said was a staunch opposition supporter.

"She worked hard and fought against the injustice under the one-party system in the 1980s and later during multi-party system because she wanted to see fairness and justice for all," he added.

He said that wanted Seychelles to seize this great opportunity to unite and reconcile the country which has been divided for so long.

"I hope there's no more discrimination and that no one is judged by his or her political affiliation and I want LDS to set this in motion," added Bijoux.

Maryvonne Rose who joined the opposition from the former ruling party in 2014 said she was happy to have lived long enough to see the day.

"They said we were free, but we were never free. I am so glad that Seychellois are now mature enough to understand the need for change and they have done it through the ballot boxes," said Rose.