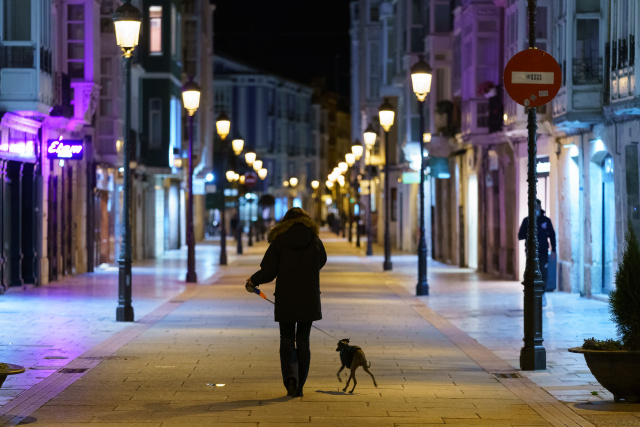 A woman walks a dog along a street in downtown Burgos, in Castilla and Leon region, after a curfew entered into force in the town on October 24, 2020. Spain was bracing for a new national state of emergency to allow the imposition of curfews as its regions today pushed for action to slow surging virus cases. The region of Castilla and Leon announced its own curfew without waiting for a government declaration, banning movement between 10:00 pm and 6:00 am. (Cesar Manso / AFP)

(AFP) - Spain declared a national state of emergency Sunday to tackle a second coronavirus wave as the World Health Organization (WHO) reported a third straight day of record new infections around the world.

France set a daily record of more than 50,000 Covid-19 cases, while Chinese officials began mass testing to cover 4.75 million residents in the far northwest after 137 new infections were discovered there.

In the United States, which has the world's worst toll at around 225,000 deaths, challenger Joe Biden accused President Donald Trump's administration of waving "the white flag of defeat" after his chief of staff Mark Meadows said: "We are not going to control the pandemic."

The WHO has warned that some countries are on a "dangerous track", with too many witnessing an exponential increase in cases, and called on authorities to take decisive action to curb the spread of the disease.

The UN agency's figures showed that 465,319 cases were declared on Saturday alone, half of them in Europe, which it said was at an especially critical juncture with winter looming.

Covid-19 has now claimed the lives of 1.1 million people and infected more than 42 million globally.

WHO head Tedros Adhanom Ghebreyesus called for global solidarity in a future rollout of any vaccine, warning that "vaccine nationalism will prolong the pandemic, not shorten it."

As the disease continued its relentless march across Europe, Spanish Prime Minister Pedro Sanchez announced the new state of emergency and overnight curfews across the entire country except for the Canary Islands.

Spain was the first EU member state to pass the bleak milestone of one million cases and has been joined since by northern neighbour France.

"The situation we are going through is extreme," Sanchez said.

Italy -- the epicentre of the first European outbreak -- also ramped up restrictions on daily life, ordering the closure of theatres, cinemas and gyms and shutting bars and restaurants early.

Governments are struggling to balance new restrictions against the need to revive economies already battered by earlier draconian lockdowns after the virus first emerged in the Chinese city of Wuhan late last year.

But populations weary of social isolation and economic hardship have bristled at the tougher measures.

"This is going to destroy us," Augusto D'Alfonsi, who owns the Torricella family-run fish restaurant in Rome, told AFP after the new measures were announced.

"We've already lost 50 percent of our customers this year. Without government aid, we're done for."

Dozens of far-right protesters in Rome clashed with riot police overnight during a demonstration against a curfew, setting off fireworks, burning bins and throwing projectiles.

Police in Berlin also broke up a protest against curbs, and launched an arson investigation after an attack on a building that housed the public health agency.

There has been opposition to tighter curbs in Spain as well, but some said they accepted the need for controls.

"The curfew is good for those who are drinking in the street a lot lately, because at our age people go out a lot, they are uncontrolled and then what happens, happens," said 17-year-old student Juan Pelayo in the town of Valladolid.

Pensioner Jose Benitez, 76, said in Barcelona: "It is beginning to worry me, because if I catch it at my age, I won't make it."

The United States remains the hardest-hit country on the planet, and on Saturday it set a daily record for new Covid-19 cases for the second straight day, at nearly 89,000, with a further surge expected as cold weather arrives.

The virus has become a central issue ahead of the November 3 election, with Biden and Trump sparring over the president's handling of the pandemic.

US Vice President Mike Pence's chief of staff tested positive for Covid-19 on Saturday, the latest in a list of figures connected to Trump's administration to do so.

"The idea that somehow this White House has done anything but completely screw this thing up is nonsense," said Trump's predecessor Barack Obama, who hit the campaign trail on Saturday to campaign for Biden, his former deputy.

After the US, the worst affected countries are Brazil, India, Mexico and Britain, while Colombia is the latest country to record one million confirmed coronavirus cases.

The disease has not spared politicians, with Bulgaria's prime minister joining a growing list of leaders who have tested positive for coronavirus.

In Germany, Frankfurt became the latest city to cancel its traditional Christmas market.

It usually attracts more than two million visitors who come to sip mulled wine, nibble on roasted chestnuts and shop for seasonal trinkets among a cluster of wooden chalets.