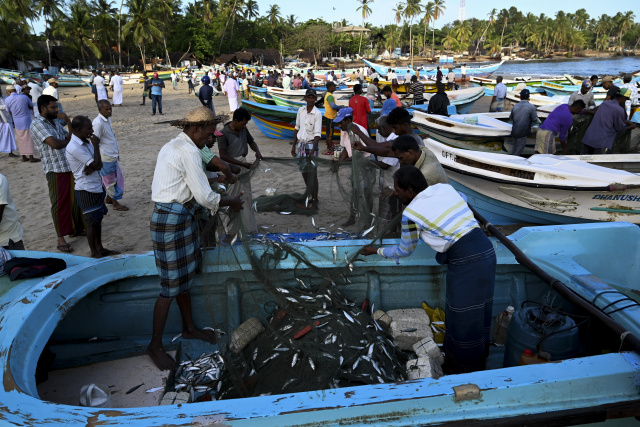 In this photograph taken on September 27, 2020, fishermen sort their catch on a beach in Arugam Bay, east of Sri Lanka. (ISHARA S. KODIKARA / AFP)

(AFP) - China warned the United States not to "coerce and bully" Sri Lanka ahead of a visit Tuesday to the strategically-placed island by US Secretary of State Mike Pompeo.

Pompeo is expected to ask Colombo to make "difficult" choices on its blossoming relationship with Beijing during his visit.

"We are firmly opposed to the United States taking the opportunity of the State Secretary's visit to sow and interfere in China-Sri Lanka relations, and to coerce and bully Sri Lanka," China's embassy in Colombo said.

The top US diplomat for South Asia, Dean Thompson, said at the start of Pompeo's four-nation tour of Indian Ocean nations -- India, Sri Lanka, Maldives and Indonesia -- that he will ask Colombo to review options offered by Washington.

Colombo has leaned heavily on China for loans and diplomatic support to fight off allegations of human rights violations, particularly in the final months of a brutal decades-long civil war.

Washington has insisted on credible investigations into charges that Sri Lankan troops killed at least 40,000 civilians while crushing Tamil Tiger rebels in 2009.

President Gotabaya Rajapaksa was the island's top defence official and his brother Mahinda was president when the final onslaught was carried out. Mahinda is now prime minister.

Pompeo is expected to raise rights issues when he meets the Rajapaksas Wednesday in Colombo which is under a partial lockdown because of a surge in coronavirus infections.

He is also to place a wreath at St Anthony's church where 56 people were killed when jihadists carried out coordinated suicide bombings last year. Five Americans were among 279 people killed in the Easter Sunday attacks on three churches and three hotels.

General » Be a reporter: Write and send your article » Subscribe for news alert
Tags: SriLanka, US, China