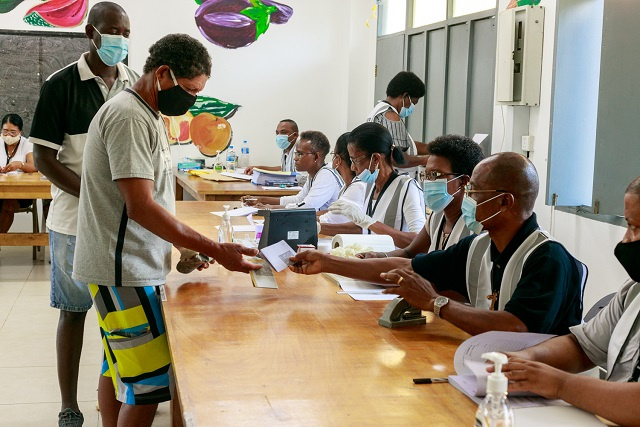 On the main voting days, one of the inconsistencies with voting procedures observed included handling and issuing of ballot papers to voters which was not uniform in all the stations. (Salifa Karapetyan, Seychelles News Agency)

CDWS said that there should have been more voter and civic education in preparation for the elections.

"Since the proclamation of the Presidential and Parliamentary elections, CDWS observers have been visible in various parts of the country interacting with key stakeholders, observing voter registration, nomination day, campaigning, the voting process, transfer of ballots, sorting of ballots cast at special polling stations as well as media monitoring," explained Gerard Lim Sam, Mission Leader of CDWS.

Lim Sam added that the scope of observation was not restricted to the 36 polling stations, but observers also patrolled the communities and responded to complaints and reports of alleged illegal activities, which were received through its hotline service.

According to the mission leader, CDWS based its observations on the provisions of the Elections Act of Seychelles - 115 islands in the western Indian Ocean - and the SADC (Southern African Development Community) Principles & Guidelines Governing Democratic Elections.

The mission also stated that the campaign period was marked with verbal and physical acts of provocation, alleged intimidation and threats, defacing of billboards, fear-mongering and hate speech.  "The mission also noted that on polling day some voters received phone calls urging them to cast their vote in a particular way and some instances SMS requesting them to refrain from voting," added Lim Sam.

On the main voting days, the inconsistencies with voting procedures observed including identification of voters, UV verification, handling and issuing of ballot papers to voters was not uniform in all the stations, sealing of ballot boxes, sorting and counting procedures.

The findings though highlighted the inexperience of the new office bearers of the electoral commission but also recognised the efforts of the team in organising the general elections within such a short period.

Bernadin Renaud, the chairperson of the Human Rights Commission, who spoke after the statement was presented, commended the work done in the organisation of the elections. Renaud who sat on the SADC Elections Advisory Council for eight years said Seychelles' commission is one of the best in the region.

Renaud also questioned the presence of the Eastern African Standby Force which was the only foreign observers for this election which he said is a group with a military background.

Others who contributed to the presentation spoke on the need to have realistic recommendations which can be implemented in time for the next elections. As a way forward it was suggested that civic and voters' education should not be done by the Electoral Commission but rather should be included in the schools' curriculum.

The Association for Rights Information and Democracy (ARID) was the other local observers' mission in elections held last weekend.

Seychellois convicted of trafficking in persons for defrauding 3 Bangladeshi labourers