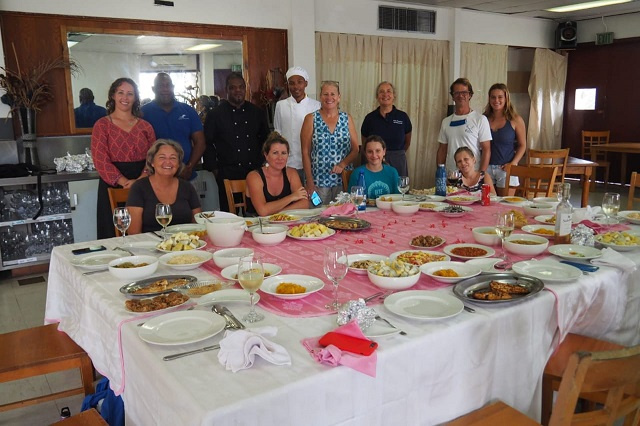 In normal times, the Seychelles islands would now be celebrating their Creole identity through the nation's annual Creole Festival. Due to COVID-19, this year there is no festival for the first time since 1985 when the festival was first launched.
During the festivities, Seychellois proudly celebrate their way of life and culture through music, food and fashion. With no festival to report on this year, SNA instead is sharing the story of a group of yachters who paused in Seychelles and who in late September during their round-the-world trip to learn how to create authentic island cuisine:
It was a lovely Saturday morning when an unusual group of students drove up the hill to La Misere. Their final destination: the Seychelles Tourism Academy (STA). The group of ten, including five different nationalities and comprising of children and adults ranging between 10 and 62 years, was on a quest to discover the ingredients, spices and the way that the Creole dishes are prepared and cooked.
“Every country has specific dishes or specific spices that make their food so special,” Amber Lim, one of the sailors, said. “In all the countries we have visited so far, we have tried to take a cooking class, learn about the culture as well as the favourite food of the local people.” Another participant Janneke Kuysters added, “the Creole food is delicious, so we were very keen to learn more.”
The academy provides training for young people who are making careers in the tourism and hospitality industry. Giving cooking classes to people who are not students are not a normal practice of the academy.
The head of the academy Flavien Joubert has welcomed this group and told SNA that this is something that the institution can do more of in the future.
It was Michel Athanase, the Resident Manager of the STA, who prepared the programme and put together the menu for the group. “It was an unusual request for us, but we rose to the challenge and made it happen,” said Athanase.
“Normally I teach 20 young students in this kitchen, so this group is very different. Most of them are experienced in cooking and they are quite curious about how we cook our food here," said Christophe Camille, the head of the Food Production and Culinary Arts of the STA.
Chef Camille had put together a nine dish menu for the group comprises of starter, main course and dessert made from fish, chicken and root crops amongst other ingredients.
The final dishes included smoked fish and mango salad, different chutneys made from papaya and pumpkin, chicken curry with coconut milk, fish in a ginger, garlic marinade, creole sauce, coconut nougat and braised banana in coconut milk. The sailors were involved in all stages of food preparation.
Even the children took part in by grating the coconuts for the desert and collected cinnamon leaves for the curry - readily available in the compound of the academy.
After five hours of cooking and learning, all was ready and the group could finally enjoy the fruits of their labour in the restaurant of the academy.
“What we learned today will travel around the world with us,” said Paul, who participated with his daughters Cleo and Jade. The father explained that “cooking at sea is always tricky. You want to make delicious food without spending too much time in the kitchen on a rolling boat. Some elements of the food culture of Seychelles we can take with us to brighten our days at sea.”

Kuysters who initiated and planned the event on behalf of her colleagues concluded by saying “Seychelles will always have a special place in our hearts and now we can keep enjoying it by cooking on board what we learned today."

Seychelles Tourism Board · health · COVID-19 · Madagascar · US · All tags