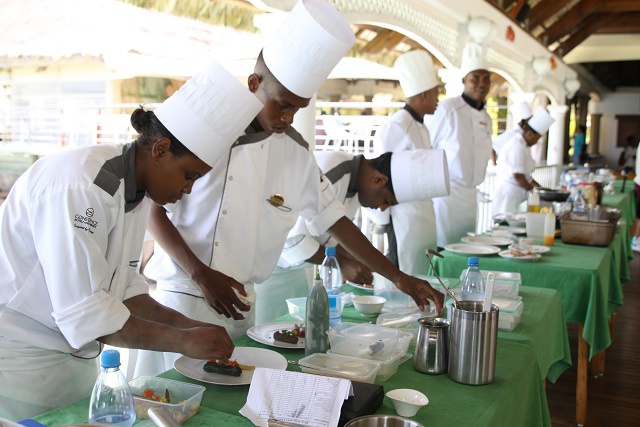 Chefs from various hotels on Seychelles second most populated island of Praslin who participated in a culinary contest held between September 5-7, 2014. (Joe Laurence, Seychelles News Agency)

(Seychelles News Agency) - As part of Seychelles ongoing efforts to improve service delivery in the hotels and other tourism related services, the archipelago’s Tourism Academy (STA) is partnering with the Hotel School of Namur Province in Belgium to allow for more exchanges for its students and lecturers.

A memorandum of Understanding between the two institutions was signed this morning at the headquarters of the Seychelles Ministry of Tourism and Culture at the ‘Espace Building’ in the Seychelles capital of Victoria.

The agreement is one of 52, STA has signed with foreign establishments that provide for exchanges and attachments of students and lecturers, allowing them to gain from exposure in countries other than their own.

Tourism being the main pillar of the Seychelles economy and employing a large number of the island nation’s population a lot of emphasis is placed on training to deliver a service that is up to the required standard.

The STA presently has 580 students enrolled on different courses, some of whom have already benefitted from internships abroad, notably in the neighbouring Indian Ocean island of Reunion and Mauritius.

Lafortune said the agreement "opens a new era of cooperation between Seychelles and Belgium."

Belgium, has a population of 11 million people divided into those who are French-speaking and Flemish-speaking.

For his part Bultot recalled that the partnership was initiated following a visit in October 2012, by the Seychelles' Minister for Tourism and Culture, Alain St Ange, at the ‘Château de Namur’ hotel and application restaurant of the hotel school of Namur.

Bultot noted that Namur is a centre in Belgium for tourism, teaching, culture and preventive medicine adding that the province also has a good centre for agronomy.

This he said could in future be an area of cooperation, as he is aware that Seychelles Government policy is to seek ways to boost food security.

Bultot also said that the hotel school is planning an international culinary competition and that Seychellois chefs will be invited to participate.

As regards to the MOU, Cliff Monty who is STA’s Coordinator for the student exchange programme, told the press that initially Seychelles will be sending a minimum of ten students to the Namur Hotel School at any one time.

Interviewed by SNA, the Principal of the archipelago's tourism academy, Flavien Joubert explained that since the main complaint in the tourism trade is service delivery, the exchanges for students abroad are aimed at changing their mindset.

"We need to improve service attitude. The level of service tends to go up and then go down. If we want to succeed in tourism, this has to be high and remain stable," he said.

Since 2008, STA has been running a full time programme in collaboration with Ireland's Shannon college where students can earn a degree in hospitality management.

While there are a number of Seychellois students and lecturers studying or on attachment abroad Seychelles also accommodate foreign students coming to Seychelles to get practical experience.

Joubert noted that presently there are some 100 foreign students from China, Mauritius, Reunion, Austria and Spain on attachment at 5-star hotels across the country with STA providing them with lodgings during their internship.