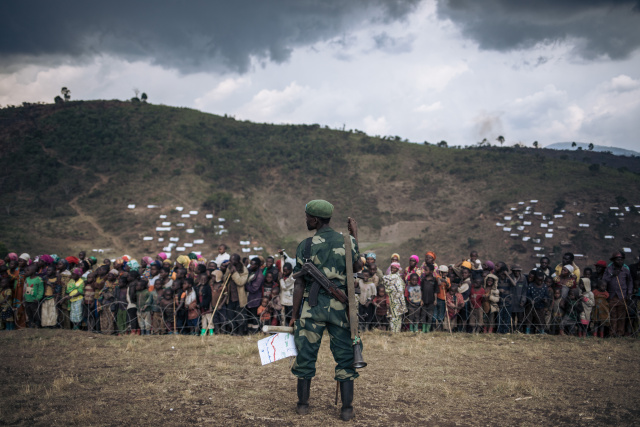 A Congolese army soldier stands guard during an official visit to the internally displaced persons camp of Bijombo, South Kivu Province, eastern Democratic Republic of Congo, on October 10, 2020. Since February 2019, the landlocked highlands of Fizi and Uvira in South Kivu have been the scene of clashes and retaliation attacks by armed groups claiming to defend the interests of their respective communities. According to the United Nations High Commissioner for Human Rights, approximately one hundred villages have been destroyed and burned, several dozen civilians have been killed and thousands of people have been forced to flee their homes. (ALEXIS HUGUET / AFP)

(AFP) - DR Congo's government has begun a process of disarming a rebel movement active in the restive province of Ituri for two decades, eight months after a peace agreement was signed.

The accord between the government and the Front for Patriotic Resistance in Ituri (FRPI), signed in the presence of the United Nations, provided for a ceasefire and the integration of FRPI fighters into the army.

Thirty-one FRPI militia fighters surrendered their weapons to the DR Congo armed forces in an official ceremony on Saturday, according to an AFP journalist.

They were then taken to Kazana, a village in Ituri, for social reintegration or integration into the armed forces, known as FARDC.

"There is no point in staying in the forest, there is too much suffering in the jungle. I came to give up my arms to start a new life," a former fighter who gave up his weapon told AFP.

"I took up arms to protect our country, today I lay them down for peace," said another 23-year-old, who said he joined the FRPI in 2013 and now wanted to join the police "to protect the population".

Jean Marc Mazio, who is in charge of the government's Stabilisation and Reconstruction Plan for Eastern DR Congo (STAREC), said "more than 1,000 fighters are expected for this disarmament, which will be progressive".

The government hopes to completely disarm the group, one of many rebel movements active in eastern DR Congo, over the next two months while the reintegration phase will take two years, he said.

FRPI spokesman Albert Munobi called on the government Saturday to respect its commitments in the peace accord.

The agreement included draft legislation to give an amnesty to the rebels except in cases of war crimes or crimes against humanity.

The FRPI has remained active since ethnic conflict took tens of thousands of lives in Ituri between 1999 and 2003, until a European military force named Operation Artemis intervened under French leadership.

One of the militia's leaders, Germain Katanga, was released from prison in March, after the International Criminal Court reduced a 12-year sentence imposed in 2014 for a conviction on war crimes and crimes against humanity.

Katanga was serving his term in DR Congo's capital Kinshasa after being repatriated from the ICC in The Hague in 2015.

Several thousand FRPI fighters were demobilised and integrated into the Congolese army from 2004 until 2006, but the group started reforming at the end of 2007.

A region rich in gold bordering Uganda and South Sudan, Ituri is wracked by a separate conflict in the northern Djugu territory, which has left about a thousand people dead since December 2017.

General » Be a reporter: Write and send your article » Subscribe for news alert
Tags: DRCongo, conflict