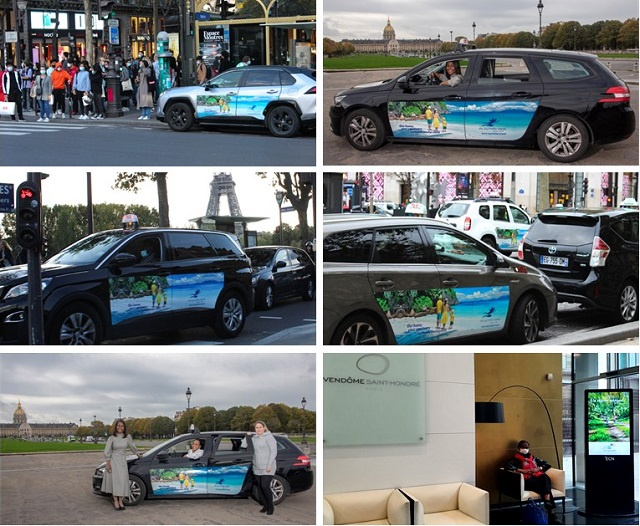 The campaign which was launched in mid-October for four weeks hopes to attract more French visitors to Seychelles. (Seychelles Tourism Board)

(Seychelles News Agency) - Striking pictures of Seychelles as an enticing travel destination have been placed on about 100 taxis in Paris' business district as part of a marketing campaign launched by the Seychelles Tourism Board (STB).

The campaign which was launched in mid-October for four weeks hopes to attract more French visitors to Seychelles, an archipelago in the western Indian Ocean.

Bernadette Willemin, the STB regional director for Europe, said in a statement last week that despite the current situation related to COVID-19 in several European cities, the efforts put into the campaign are essential for the survival of the destination.

She said that the objective of the campaign is to remind the public that Seychelles is ready to accommodate visitors and that the islands are considered one of the safest destinations to travel to now.

Willemin said that even though not all the prerequisites for travel are in place at the moment, it is important that Seychelles remains visible.

The STB office in Paris said they have opted for a dynamic and earthly medium of communication which allows them to reach out to a significant percentage of active workers in selective business firms with high-income employees.

"It was a strategic decision to have an important part of the campaign stretched over the area of La Défense for it is Europe's largest purpose-built business district," she said.

As part of the campaign, the STB team in Paris has extended the marketing effort to corporations in the French capital, as it remains a strategic place used by regular holidaymakers.

According to STB, the business zone is composed of 560 hectares, 72 glass and steel buildings of which 19 are completed skyscrapers, 180,000 daily workers, and 3.5 million square metres of office space.

"This is a period whereby European cities tend to be grey and foggy hence the contrasting impact of our visual depicting sunshine, warm and vivid colours which could not go unnoticed even during the peak and rush hours," said Willemin.

Tourism which is the top economic contributor to the Seychelles' economy has been severely affected with a downturn in overseas travel due to the COVID-19 pandemic.

Tourism » Be a reporter: Write and send your article » Subscribe for news alert
Tags: Seychelles Tourism Board, COVID-19