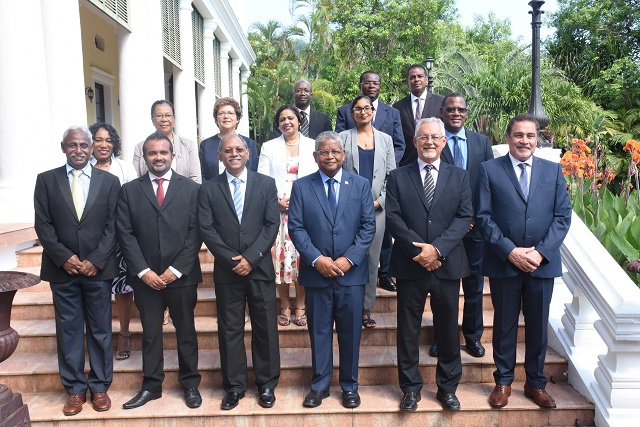 (Seychelles News Agency) - Newly elected President Wavel Ramkalawan has named a Cabinet with 13 ministers, 11 of whom were sworn in to office on Tuesday.

A staunch opponent of the previous government who has spent decades in the political sphere, Ferrari has a background in sociology and political economy, a degree earned in Aix-en-Provence University in France. A large part of his work has been as co-editor of Regar, a weekly newspaper in Seychelles for 20 years.

Ferrari was the elected member for the central district of Mont Fleuri in the 6th National Assembly from 2016-2020.

Radegonde joined the diplomatic service in December 1976. He has served as Secretary General of the Indian Ocean Commission (IOC) and High Commissioner of Seychelles to Kuala Lumpur Malaysia.

Before his new appointment as minister, he served as a resident ambassador of Seychelles in France. He has extensive experience in international relations, political affairs and diplomacy.

Hassan, 38, holds a degree in international business, finance and economics and a Master's degree in banking and finance. He has previously served at the Ministry of Finance, where he started as a policy analyst, before moving on to the Central Bank of Seychelles (CBS) as Head of Financial Surveillance. As of four months ago, Hassan joined telecommunication company Cable and Wireless as chief digital and risk officer.

Fonseka served in the British Forces for around 22 years and worked in a special unit which dealt with sensitive information. Upon his return to Seychelles, he founded Pilgrims Security in 1993. The local business venture came just after he had orchestrated the private security elements surrounding late President James Mancham return to Seychelles in 1992.

Derjacques, an attorney and barrister at law and notary, has served in the Office of Attorney General for three years and has been running his private law firm for over 28 years.

He was a member of parliament in Seychelles in 1998 and 2007. He was the chairman of the bar association and has sat on the appeals board of the Financial Services Authority.

Vidot's career has been in the healthcare and medical field, where she has worked as a nurse and midwife. She holds a Master's degree in health services management.

She also worked at the Commonwealth Secretariat London as health advisor to other commonwealth countries and other international organisations, including the World Health Organisation (WHO).

Upon her return to Seychelles, Vidot worked as a health advisor with the Ministry of Health where she was also tasked with implementing reforms to improve the level of care within the facilities.

Zialor holds a diploma in applied biology from Australia and taught biology and chemistry in secondary schools before being promoted to deputy headteacher. She pursued an MBA in educational leadership before serving as headteacher in two schools. Following her years in education, including at the Ministry of Education headquarters, Zialor moved to the then Seychelles Institute of Management (SIM) which later became The Guy Morel Institute (TGMI) in charge of the diploma courses in relations to management and entrepreneurship.

Vidot, 31, is the youngest minister in President Ramkalawan's new administration and was the first nominee to be approved unanimously. Her academic background includes a degree in accounting and finance from the University of Manchester, as well as masters in professional accountancy. She has held positions primarily in the financial services industry and has gained some experience in auditing. Before her appointment as minister she was working in offshore

Hoareau's career started in teaching but swiftly evolved to include experiences in the insurance industry followed by the tourism sector in which she spent the majority of her years. She attended school at the Regina Mundi Convent and later graduated with an education certificate for special needs children in England.

Later she worked for the insurance company SACOS and from there she worked in the tourism industry, mainly in private tourism companies.

Joubert has worked for 24 years in public service and his most recent position was as chief executive of the Landscape and Waste Management Agency (LWMA). He got a Higher National Diploma (HND) in environmental analysis in England followed by a degree from the same university. He also holds a master's degree in environmental studies.

Joubert has held various positions in the environment ministry until he was appointed chief executive (CEO) of the Seychelles National Parks Authority (SNPA) in 2015.

Valentin, 49, is a former vice-chancellor of the University of Seychelles.  He has an academic background which includes a bachelor's degree in education from Australia, a master's degree gained in Malaysia and a doctorate earned in England. His speciality in education is science and mathematics.

Francourt has lived abroad for quite some time after leaving Seychelles in 1987. She started her career in banking, then found her passion for volunteerism, before opting for re-training and switching over a career in education.

In Seychelles, Francourt established her own business consultancy whereby she conducts workforce training.

An engineer by profession, who has practised in the United Kingdom, Canada, the Gulf and Seychelles, Rangasamy holds a Master of Science in concrete structures from Imperial College London University of London and Bachelor of Engineering in civil engineering. He has experience in construction and has worked in several countries.