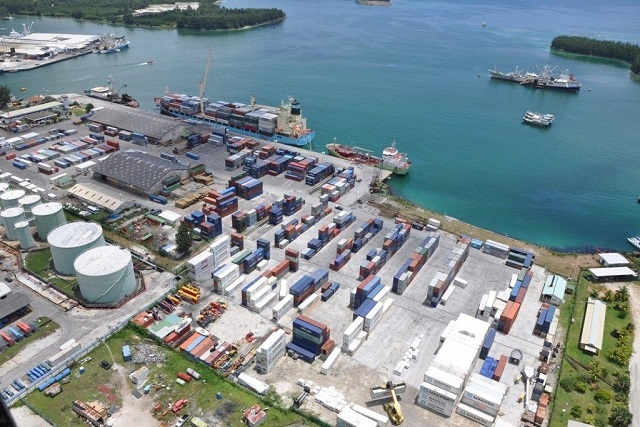 Derjacques said that the government will be bringing its full support for the extension of Port Victoria. (Seychelles Ports Authority)

(Seychelles News Agency) - Seychelles' new minister for transport has said that he is impressed with the plans by the Seychelles Ports Authority for infrastructure development as well as the authority's ability to self-finance significant projects.

Antony Derjacques visited the island nation's main port, Port Victoria, on Thursday. Derjacques, who took office on Tuesday, said that he will be giving a lot of attention to the Port Authority.

Being new to the portfolio, the minister was given an overview of the authority's mandate, current and future plans as well as its constraints and challenges. Derjacques also held a meeting with the senior management of the authority before touring the port.

The minister said that he was encouraged by the success of the Ports Authority, acknowledging that there are areas where the authority will need support from the government.

"We will bring determination to projects already conceived to go ahead. We want to maximize the creation of enterprise and commercial activities. We also want to see more facilities because they are in the end facilitators and landlord to ensure safety, security and access to the port for industries and commerce. So, what we bring is political will and determination and a knowledge of the private sector," Derjacques told journalists.

The minister said that he and the government will assist the authority with some of the challenges it is facing such as negotiations with regards to payment of tax and tax penalties, expansion of facilities, as well as with the reviewing of the Port Authority Act to create standards and ensure standardization in port facilities on the three main islands of Mahe, Praslin and La Digue.

"On their growth potential for the future, I want to look at their finance, as there is a demand for them to decrease their tax. And we need as government to satisfy that what the port is doing helps the whole population and this is the reason for us to consider if they will pay tax as they are doing or if this can be reduced and penalties, this will be brought forth to the Cabinet for renegotiation," explained Derjacques.

The minister who is responsible for land, maritime and aviation transportation said the government will be bringing its full support for the extension of Port Victoria, which now due to budgetary constraint will be done in phases.

"It will go ahead because they have the facility with the bank to go ahead though it will not be 100 percent it will be enough. The only thing they have asked that the government assist so that this can be realised. Whatever they ask will be bought to the cabinet for discussion because we need such development for Seychelles.  We need this facility and we need these vessels to come to Seychelles," said Derjacques.