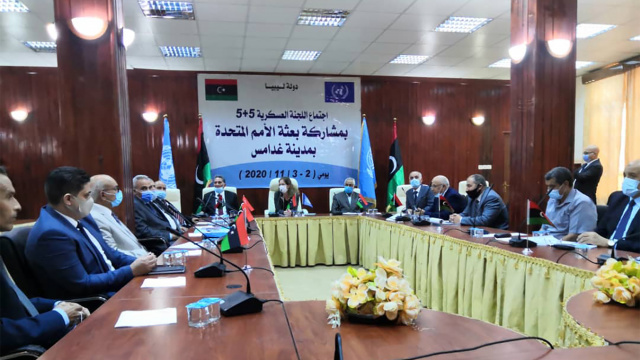 Members of Libyan joint military commission meet for talks in Ghadames, a desert oasis some 465 kilometres (290 miles) southwest of the capital Tripoli, on November 2, 2020. Rival Libyan military officers began talks on November 2 on home soil for the first time following a ceasefire agreement last month, discussing implementation of the deal. The three-day meeting of the joint military commission is taking place at a remote area near Libya's borders with both Algeria and Tunisia, far from the power bases of either side. The military commission had been dubbed "5+5", because it is made up of five officers from each camp. (AFP)

(AFP) - Libyan politicians from the war-ravaged North African nation's rival administrations met for the latest round of peace talks in Morocco on Thursday.

The lawmakers met in the coastal town of Bouznika, south of Morocco's capital Rabat, for talks that come ahead of a major meeting in Tunisia slated for November 9.

The talks follow a "permanent" UN-backed ceasefire agreement signed in Switzerland last month, intended to pave the way towards a political solution to the country's grinding conflict.

Libya, with Africa's largest proven crude oil reserves, has been wracked by conflict for nearly a decade, since the overthrow and killing of dictator Moamer Kadhafi in a NATO-backed uprising in 2011.

It has since been dominated by armed groups and divided between two administrations that have been bitterly-opposed: the UN-recognised Government of National Accord (GNA) in the capital Tripoli, and a rival administration in the east backed by military strongman Khalifa Haftar.

Warring factions returned to the negotiating table in September in UN-supported talks, with negotiations being held in Morocco, Egypt and Switzerland.

Details of the agenda of the talks in Morocco have not been released.

Negotiators are pushing parallel efforts to broker peace, with the military section of talks taking place this week for the fist time on Libyan soil.

On Tuesday, former enemy officers sat together in a joint military commission and agreed on a road map for implementing the ceasefire deal.

Africa » Be a reporter: Write and send your article » Subscribe for news alert
Tags: Libya, Morroco