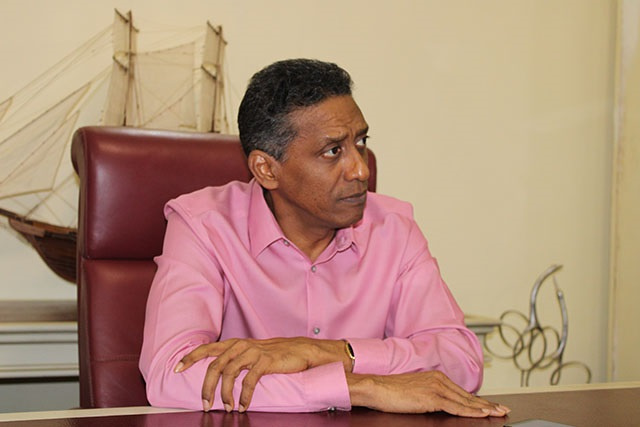 Faure said that "throughout my presidency, I was faithful to my belief that Seychelles is bigger than us all." (Seychelles News Agency)

(Seychelles News Agency) - Danny Faure is the first president of Seychelles to lose a re-election bid after the re-introduction of multiparty democracy in 1992.

Faure lost the October presidential election after receiving 28,178 votes or 43.5 percent. His party, United Seychelles, won only six of the 26 directly elected seats in the National Assembly election held simultaneously.

This was his party's first defeat at the top office since 1977, when it came to power through a coup d'état.

Faure spoke with SNA about his four years as president of Seychelles from 2016 to 2020.

SNA: How would you describe your time as President?

DF: Throughout my presidency, I was faithful to my belief that Seychelles is bigger than us all. I started and continued my mandate on the platform of national unity. I worked hard to bring the country together. It was challenging to work with a National Assembly controlled by the opposition. But the last six months of my presidency were by far the toughest, where Seychelles was facing incredibly difficult challenges after COVID-19 hit on 14 March.

SNA: Which moment would you say was the most memorable?

DF: There have been many memorable moments, but one that will always stay with me was receiving France Pointe at State House, a man I met struggling on the streets of Victoria just a few months earlier. It reminded me of the crucial importance of protecting human dignity, the same reason I joined politics many years ago. Being able to receive France at State House touched me a lot, and that soon after we were able to provide him with a home.

SNA: Over the past four years, you've travelled all over the country. How much did what you saw in those visits impact the decisions you took?

DF: All of my visits to districts and workplaces, and conversations I had in my meetings with members of the public every Tuesday helped me put policies in place that serve our people and are in line with principles of transparency, accountability and good governance.

For example, there was an urgent need to base housing allocation on a transparent system. The 24-24 housing project developed under my administration was based on the need to allow families to remain in their communities rather than relocating for a new house as far as practicable.

SNA: What was the toughest decision you had to take during the four years?

DF: One of the toughest decisions I had to take was abolishing 5th June as a public holiday. This was in line with my belief that the country had to move forward and reconcile with its past. I took this decision on my own after a great deal of reflection, without consulting any of my predecessors. It was incredibly difficult.

SNA: You held press conferences. How much of what came out of those sessions were taken up and followed up on?

DF: I was happy to create a space for regular press conferences because I believe that the media is the fourth pillar of our democracy. I really enjoyed each one of them. The questions that were asked helped me in revisiting some policies but also in moving forward with my agenda, and the good policies and practices we had in place in Government. It was also an opportunity to educate and inform our people on issues raised by our journalists. I took everything that came out of these press conferences seriously.

SNA: What kind of relationship did you have with the media?

DF: At no point in my presidency did I ever dictate content to the media. I had an excellent relationship with them, based on mutual respect and the high value I ascribe to the work of journalists. I hope that they continue to get the necessary support to do their work from all parties concerned.

SNA: Were you your own man or did anyone or group dictate to you?

DF: I was my own man and had my Cabinet of Ministers to advise me. At no point was I dictated to by any group.

SNA: What do you think have been the biggest strengths of your administration and its weaknesses?

DF: The biggest weakness was the service delivery mechanism in some areas and also communication. We did not always communicate effectively so that members of the public could see what the government had put in place and get the information that they should have.

My administration remained steadfast in pursuing a path of people-centred development where there is peace and stability. We strengthened our democracy, built institutions and consolidated a strong social protection system that ensured our people could live in dignity.

SNA: What would you do differently if you could rewind time?

DF: It's always easy to look back and identify things that could have gone differently, but I know that at the time, I always took decisions in the best interest of Seychelles and its people. I have always been and remain a servant of the people.

The Interview » Be a reporter: Write and send your article » Subscribe for news alert
Tags: United Seychelles, National Assembly, COVID-19