First Lady of Seychelles to favour children, education in new role, but hopes to avoid limelight 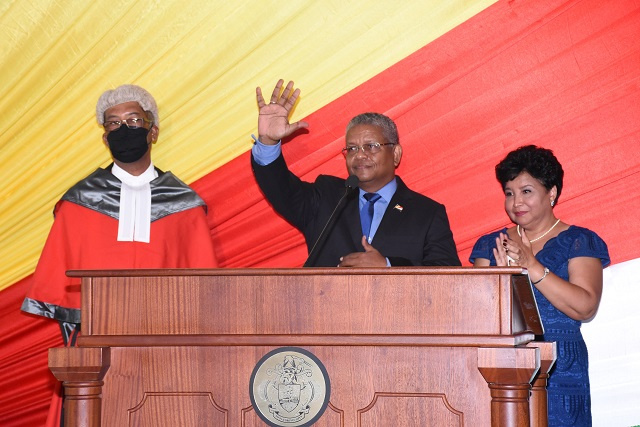 The First Lady next to President Ramkalawan at the swearing in ceremony. (Joena Meme)

(Seychelles News Agency) - After several years without one, the political tides that have swept over Seychelles bring the island nation a new First Lady, one who says she will seek to favour children and education in her new role.

Linda Ramkalawan, 57, has been married to the newly elected President Wavel Ramkalawan for 35 years and together they have three sons: Samuel, Caleb and Amos. She has decades of experience on the financial side of Seychelles' tourism industry and hopes to be able to live a life outside of the limelight even though she's married to the president.

SNA: Please tell us a little about yourself.

LR: I was born and raised in St. Louis in a family of three, a brother and a sister, and I am the youngest of the family.  I attended primary school at Bel Ombre and then went to Victoria School. I then joined the Senior School and was in the same class as President Danny Faure and I remember he wrote in the exercise book in which students left messages when finishing school that "I hope you will always remember me as the stupid boy who sat in front of you in 5a."

I then joined hotel school and studied front office and straight from then at 17 years old, I started working as a receptionist on December 23, 1980 at Le Meridien Fisherman's Cove hotel. After a year and a half, I then discovered that working directly with clients was not something that I enjoyed as much as working with paper. I started accounting, tallying the bills of clients and registering all the incomes on a large ledger. Back then, everything was done manually.

In 2001, I was promoted to financial controller after my general manager saw my potential and had the confidence that I could do the job. I have worked at Le Meridien Fisherman's Cove hotel for 39 years and retired last year.

SNA: You retired last year. So what plans did you have for your retirement?

LR: There were two main reasons that pushed me to stop working. The first was because of my family. At home, we found ourselves in a situation where our younger son was coming home from school to an empty house. I understood that this was not healthy.

When you are younger you are more innocent, and hence won't think of doing something wrong, not that I'm saying he would have done so, but it was a risk that we were taking. As we were a small team, I found myself working from 8 a.m. right through to 11 p.m. to cover the shift of the duty manager as well.

My work took a lot of my time. I felt that our children, even if they didn't talk much about it, felt our absence. I also travelled a lot, sometimes three times a year, and hence I had to leave them behind and Wavel, not having an 8 to 4 job was not present as well.

The second reason is the changes that were taking place within the company as Marriott had bought Starwood and their philosophy of work was not necessarily the same as my way of doing things.

I dedicated 39 years of my life to my work and I felt that I had given enough and it was time to focus on myself and breathe a little. I always thought that maybe I would do something lighter in terms of responsibility, even if the pay wouldn't be the same - just something to keep me busy. Then COVID happened, which meant that businesses sort of froze, and now there is my new responsibility, so I do not think that I will be going back to full-time employment again.

SNA: How do you feel to be Seychelles First Lady and how are you finding the responsibility so far?

LR:  It has been about 30 years that Wavel got involved in politics and it has been a long journey. There have been times when we thought he was going to stop, but as he says, he is a person who perseveres and finally he made it. It was a moment of great joy for us but at the same time, there was a level of fear as to if he would be able to meet the expectations of the public. We know that people have high expectations but the time that we are living in, things are not easy. He got the responsibility at a difficult time. Despite all that, we are all really proud of what he has managed to achieve.

For me, this is not the life that I had wished for myself. I love my privacy and I do not like to be in the limelight a lot. I have to adapt and go through this transformation as well to accommodate the new role I've been assigned. The role itself has not yet been properly defined. As you know we did not have the first lady and hence, this year there is no budget for an office.

Hopefully, in January there will be a budget for an office. I personally would like to work with children as I feel that there are different elements that I can help with. I do not want to create any new organisation as I feel that we have enough. I would like to meet with them, learn about their programme and how I can bring in some extra support for them and how we can work together to `achieve their goals.

I would really like to work with children, especially those who are more in disadvantageous positions. Let us not forget about education as well. In the past, there were 901 classes in the districts where retired or active teachers gave lessons to elderlies who could not read or write.

I feel that we can bring the same level of support to some children, especially those struggling, whose parents are struggling with homework. I am more than sure that they would love to get help as, maybe, they cannot afford to get extra classes. There are parents who had their children at a young age and they do not feel that they can academically help their children. I would like to see a programme in the districts that provides support to these children. Let us use our retired teachers or teachers who can spare an hour at least once a week to conduct different classes for the children.

SNA: In the past, the first ladies of Seychelles were patrons of orphanages. Is this a role you see yourself taking?

LR: If I am asked to, gladly I will do it. However, I do not find myself necessarily in the role where I will be in charge of an organisation. I would rather work alongside those who have been trained in a particular field and who have more experience than me. I wouldn't like to head of an organisation. If they want to give the honour of being the patron of the organisation then, I will accept it.

SNA: You speak a lot about children so does family mean a lot to you?

LR: It means a lot. I feel that in Seychelles there is a lot of work that needs to be done with families. There are a lot of families that break up. Our rate of divorce and separation, for those who are not married... Sadly we do not have many strong families where you see a couple remaining together.

You see a lot of broken families, where single mothers are struggling to bring up their children alone. Sadly, sometimes, we women are the ones who are the cause of the suffering of another woman. Women need to have solidary towards and respect for other women. We lack morality in our society.

SNA: How will you strengthen the value of morality in families?

LR: Through education and by meeting with women, talk about the problems that we are going through, encourage them to talk through problems. Couples should not to break up as soon as there is a little hiccup in the relationship but work on the problem. We also need to have faith and pray, even before we share our problem with friends and family. Bring it firstly before God and ask for His guidance on which path one should take.  There is also the need to have patience as not all problems can be solved quickly.

SNA: What other contributions would you also like to make to our society?

LR: There is a lack of respect in the country, especially on social media. I do not have a presence on social media, however, my friends have repeatedly sent me some posts, I feel that there is a great lack of respect for one another. There needs to be respect and let us not let politics divide us. We all have our right to association and the fact that we have different opinions does not mean that I have to insult or disrespect others.

SNA: What role did you play to encourage the president to persevere and not give up?

LR: Everyone knows that I have not been active in politics. I have never attended a rally in my life. I have attended a few conferences, annual conventions and a workshop held for women. I always told him that I got married to a priest, not to a politician. Expect to see me in the church discharging the role of the wife of the priest but do not expect to see me on a field cheering you on.

However, at home, he knows that, in the background, I give him all of my support. When he goes through low times, he knows that we can sit down and have a conversation and encourage him in any way that I can, and provide a supporting shoulder. During this last election, we felt that things were changing and I think that people expected me to make more public appearances. The fact that I stopped working gave me more free time. I felt that change was coming and hence it was time to step up and give him the support.

SNA: What last words would you like to leave our readers with?

LR: I would like everyone to respect us as we are. When we do something wrong, it's okay to let us know, however do not get too involved in our private life. Respect our privacy. If I'm walking alone in town, allow me to do so.