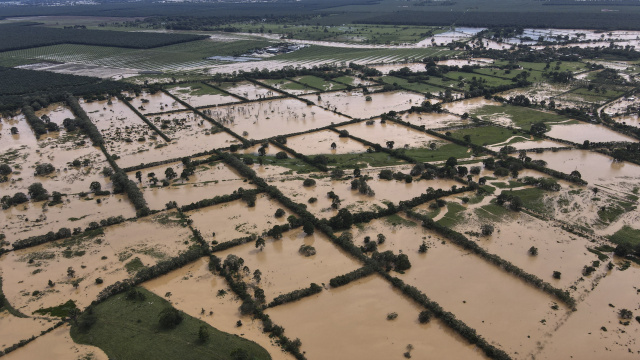 Areal view of a flooded area due to the heavy rains caused by Hurricane Eta, now degraded to a tropical storm, in Machaca village Puerto Barrios, Izabal 277 km north Guatemala City on November 5, 2020. At least four people, including two children, died in landslides as tropical storm Eta swept through Guatemala, civil protection officials said Thursday. The death toll from hurricane Eta rose to at least 12 Thursday as it spun itself out into a tropical depression in Central America, while rising floodwaters and a wake of destruction in Nicaragua, Honduras and Guatemala left thousands without shelter and at risk of landslides. (Carlos ALONZO / AFP)

(AFP) - About 150 people have died or remain unaccounted for in Guatemala due to mudslides caused by powerful storm Eta, which devastated an indigenous village in the country's north, President Alejandro Giammattei said Friday.

The toll is in addition to the approximately two dozen people who died elsewhere in Central America since Eta made landfall in Nicaragua on Tuesday as a hurricane.

Giammattei said an army unit had arrived in the northern village of Queja to begin rescue efforts, amid fears that most of the residents had been killed.

A preliminary report indicated that "150 homes have been buried with 100 people dead," he said.

Giammattei added that another mudslide in the northeastern department of Huehuetenango, on the border with Mexico, had left 10 dead.

"We calculate that between the dead and the missing, unofficial figures show about 150 dead," said Giammattei, updating the country's death toll from the 50 fatalities he had reported on Thursday.

He called the situation in Queja "critical," with heavy rain continuing to fall and setting off new mudslides, while roads are still blocked.

Some 2,500 people in the impoverished Mayan indigenous area had lost their belongings in the deluge of mud.

Eta tore through Central America, leaving death and destruction in its wake since it first rocked Nicaragua as a Category 4 hurricane.

Two days later it exited Honduras as a tropical depression, although forecasters warned it could again strengthen into a tropical storm as it heads towards Cuba.

Cuba began taking measures on Friday to soften Eta's impact, ahead of the storm's expected arrival on Sunday.

Despite Eta having lost power, the US National Hurricane Center continued to warn of "life-threatening flash flooding" over portions of Central America.

In Honduras, 10 people were killed by landslides and floods, authorities said, warning there could be more victims.

Thousands remain stranded in Sula Valley, the industrial hub of Honduras, and some have been appealing for help through the media.

"We need a boat or helicopter. We haven't had food in two days, there's about 60 people here with children," a woman told Today program on Friday from Ciudad Planeta.

The Honduran government said Friday that 16,000 people had been rescued from Sula Valley.

In Panama, the damage was concentrated in Chiriqui province, on the border with Costa Rica, where the storm destroyed homes, roads, bridges and crops.

"We are just starting with this titanic task," Pino said.

In Costa Rica, a 71-year-old American and his Costa Rican wife died when a landslide buried their home in the southern canton of Coto Brus, on the border with Panama.

Around 1,400 people in the south and Pacific coastal regions were taken to shelters after heavy rainfall saw rivers break their banks and flood vast areas.

A fisherman was killed on Thursday in El Salvador, where authorities evacuated 1,700 people whose homes were at risk from flooding, the civil protection agency said.

As the surface layer of oceans warms due to climate change, hurricanes are becoming more powerful and carrying more water, posing an increasing threat to the world's coastal communities, scientists say.

Storm surges amplified by rising seas can be especially devastating.

General » Be a reporter: Write and send your article » Subscribe for news alert
Tags: Guatemala, CentrAm

Honduran migrant 'caravan' resumes from Mexico to US: AFP reporter