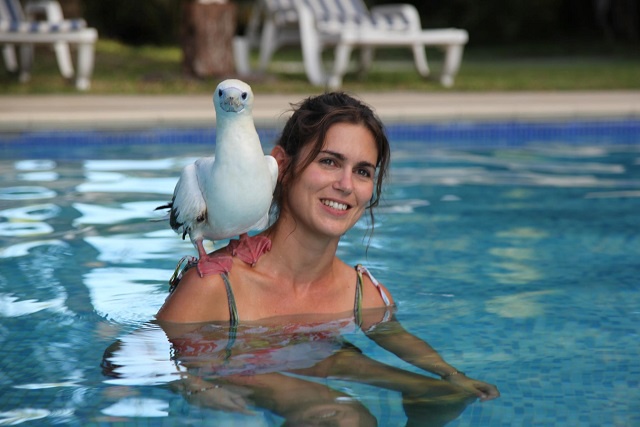 (Seychelles News Agency) - It was the most distressing find: in May 2011, a juvenile red-footed booby lay helpless on the ground, bloodied and broken, and suffering alone in pain. The sea bird’s right wing was twisted unnaturally, its bones broken in several places.

Aurélie Duhec and her colleague Richard Jeanne, two conservation officers at the Seychelles' Island Conservation Society were distraught at the sight and knew they had to do something to help the injured bird. They suspected that a larger frigate bird had attacked the juvenile booby and left it for dead.

After weeks of loving and attentive care, the red-footed booby, which Aurélie had named Willie, slowly began to recover.

“I was amazed to observe how she let me tend to her injuries without a fuss during her convalescence; she was calm, but always kept an eye on me as I tended to her wounds and observed what I was doing to cure her,” said Aurélie, who was at the time based on the coral island of Alphonse, situated within the outer islands of the Seychelles archipelago in the western Indian Ocean.

As much as they tried to mend Willie’s broken bones, Aurélie and Richard slowly realised that she would never be able to fly, but the bird, which had since begun to grow out of her fluffy brown juvenile feathers and develop the smooth, pure white feathers of an adult, would not let her inability to fly hamper her determination to survive.

Completely dependent on her human saviours for food and care, Willie developed a strong bond with Aurélie, who came to consider her flightless companion as a true friend.

“Over time she came to appreciate affection and would often come to me for a cuddle, nestling her head on my shoulder and at times falling asleep with me,” said the French conservation enthusiast in a recent article she wrote for the ICS.

Growing into a beautiful adult red-footed booby with white feathers and pink eyes surrounded with blue, Aurélie was convinced that her friend was a female. Although red-footed boobies do not display any noticeable differences between the sexes, females are usually slightly heavier than their mates.

Apart from her obvious affection for Aurélie, Willie quickly became a firm favourite with all the ICS staff on Alphonse, as well as the guests who frequented the island’s hotel. Unable to forage for herself, Willie was always delighted to receive a gift of fish from her human friends.

Aurélie described how Willie, whom she described as a bird with a fighting spirit and wonderful personality, had enjoyed liberty and happiness on the island, walking around confidently and setting herself flight training sessions on the beach.

“She loved to climb on our bikes for a ride and, more rarely, stayed for hours at sea as she was a confident swimmer and loved the water,” she said.

Unfortunately, Aurélie and Richard received a new posting with ICS at the beginning of the year to set up the island’s first conservation base; they were both to move to Farquhar Island for the next two years, and this meant that Aurélie would be separated from Willie.

A trained geologist and oceanographer, Aurélie first came to Seychelles in 2008 to conduct research. She returned in 2009 and worked for 8 months on Aldabra before joining the ICS team on Alphonse in 2011.

Convincing herself that Willie would be well looked after by the Alphonse Island staff, who all adored Willie, Aurélie and Richard left frequently for Farquhar to prepare the new base for their move. Such were her misgivings and her feelings of regret at leaving her friend behind, however, that Aurélie had even resolved to bring Willie to Farquhar when they moved there permanently on September 16.

Sadly, however, this resolution would not come to pass. Increasingly, Willie was having difficulty with food over the months she had been separated from Aurélie, and after recently refusing to eat for several days, passed away on September 10.

After suffering the pain of losing Willie, Aurélie felt compelled to share Willie’s story with the world, both as a final way of saying goodbye and to educate others about the special bond that humans can have with wildlife.

In a telephone interview with SNA yesterday afternoon, Aurélie said she still did not know for sure what had caused the bird’s death, but said she had received reports from her colleagues on Alphonse of Willie making some strange head movements that they suspect could have been related to a problem of a cerebral nature.

“Her stomach contents were examined because we also thought she could have swallowed a big fish bone that could have caused some injury, although this would be very unlikely as she was fed by my colleagues who knew exactly what to give her,” said Aurélie.

Nothing out of the ordinary was found in the bird’s stomach.

In the end, Aurélie suspects that her strong bond with Willie could be a major contributing factor to her demise.

“It could be that she was saddened by my departure,” she explained. “Once when I went on holiday for a month I was told by my colleagues that the first week I was gone the bird was very disturbed and did not eat.”

“When you have a pet like a dog or cat it becomes part of your family and this is how it was with Willie,” she added. “It was an emotional shock and I am saddened that she died.”

But Aurélie thinks that her companion is now at peace and in total freedom, writing in her article that she believes that in death, Willie had regained her ability to fly and was now “flying high above us”.

“A real release for special bird that I will always call my friend,” she concluded poignantly.