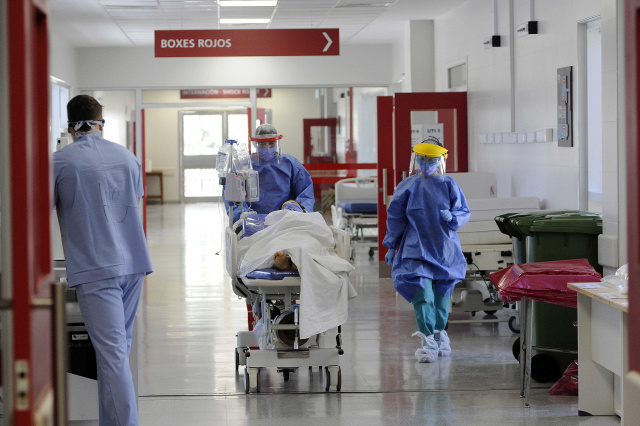 A covid-19 patient is transported on a stretcher at the intensive care unit of the Central Hospital in Mendoza, Argentina, on November 6, 2020, amid the new coronavirus pandemic. In the Central Hospital of the Argentinean city of Mendoza there is some relief for the recent decline in cases of covid-19, but those responsible are not confident and try to prepare for a possible second wave, as is currently happening in Europe. (Andres Larrovere / AFP)

(AFP) - More than 50 million novel coronavirus infections have been detected worldwide, according to a tally from official sources compiled by AFP at 1615 GMT on Sunday.

A total of more than 50,010,400 cases, including 1,251,980 deaths, have been recorded globally since the pandemic erupted in China in December last year.

Europe, with 12.6 million confirmed cases for more than 305,700 deaths, has once again become the epicentre of the pandemic.

Last week, out of the more than 3.9 million new cases recorded in the world, more than half (2.1 million) were in the 52 countries of the European continent.

The United States, which experienced a slight respite over the summer, has seen the number of daily infections top 100,000 cases for the last few days.

The country is approaching 10 million confirmed cases for more than 237,000 deaths, or a fifth of all the infections detected in the world.

And the number of positive cases is continuing to climb, with an increase of 36 percent in new infections detected in a week (738,000) compared to the preceding one (542,000).

After Europe, the worst-hit regions are Latin America and the Caribbean with 11.6 millions infections and 411,700 deaths and Asia with 11 million cases and nearly 177,000 deaths.