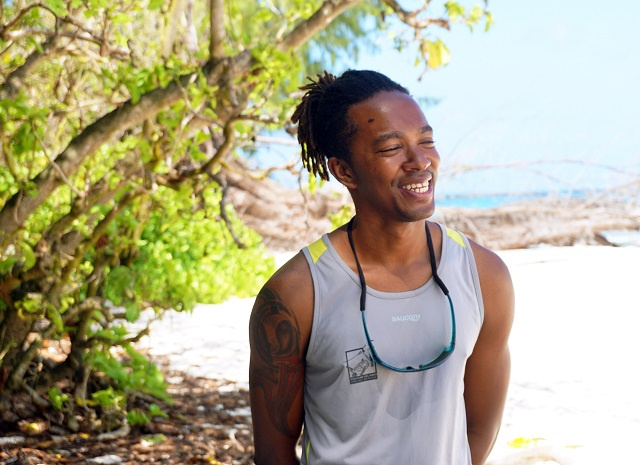 Laurence won the 2020 African Ranger Award, a recognition promoted by the Alibaba Foundation and the Paradise Foundation. (Dailus Laurence)

"I think that I have won the award for all the hard work and commitment that I have put into my job throughout the years, not to forget that the award belongs to the team of Cousin Island, as everything we do is a team effort," said Laurence.

The African Ranger Award was created by billionaire Chinese entrepreneur Jack Ma under his Alibaba Foundation together with the Paradise Foundation which is run by some of China's most famous business people and philanthropists.

"What we are lacking is education and that is where the government comes in. I think it if we have space for subjects such as religion and history in schools, we should have space for conservation as well," said Laurence.

He added that "conservation in school shouldn't only be about getting kids' heads stuck in books but also going on field trips and exploring our nature and have a better understanding of our ecosystem."

The 29-year-old Seychellois has been working on Cousin Island, one of the country's special reserves, since he was 21. Cousin Island is managed by the environmental not-for-profit organisation, Nature Seychelles.

"I would like to thank Dr. Nirmal Shah for nominating me and to have put his trust in me when he decided to promote me to chief warden. I would also like to thank Eric Blais our island coordinator for mentoring me and also the whole management team of Nature Seychelles," he continued.

The award also includes $10,000 worth of prize money, which Laurence has decided to share with the team on Cousin Island, saying "we are more than just a team - we are a family and we depend on each other on a daily basis. Just like the saying goes 'no man is an island.'"

A typical day for Laurence on Cousin Island starts with a short briefing from the science officer and then in pairs, Laurence and his team go out to monitor either the Seychelles magpie robin or other sea birds.

"Most of the time we are involved in monitoring, beach cleaning and tour guiding and maintenance work. We also do beach cleaning and trash sorting, beach profiling, clean trails to remove debris and do maintenance on our boat engines and water pump. We normally do guide tours around the island whereby we explain about the wildlife and what is the importance of protecting them. As we are now in the turtle nesting season, we do beach patrol around the island to check turtles that have come to nest," he added.

The chief warden wishes for adults to lead by example that the younger generation can follow as conservation is not only the work of rangers and warden but also that of the whole community.