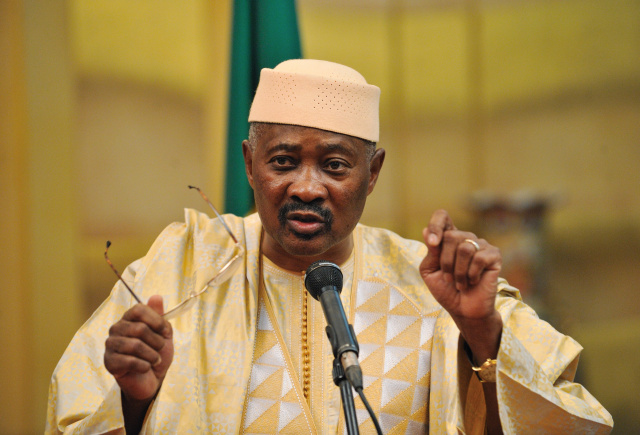 (FILES) In this file photo taken on February 25, 2010 Malian President Amadou Toumani Toure and his French counterpart Nicolas Sarkozy (unseen) give a press conference at the presidential palace in Bamako after French hostage Pierre Camatte was released by Mali with an exchange of islamists prisoners. France denied that it had paid a ransom for Camatte, who was kidnapped on November 26 from a hotel by Malians who passed him on to Al-Qaeda in the Islamic Maghreb (AQIM), the North African franchise of Osama Bin Laden's militant movement. Mali's former president Amadou Toumani Toure, who led the Sahel nation for 10 years before being ousted in a coup, has died in Turkey aged 72, a family member and a doctor said on November 10, 2020. (Eric Feferberg / POOL / AFP)

(AFP) - Mali's former president Amadou Toumani Toure, who led the Sahel nation for a decade before being ousted in a coup, has died in Turkey aged 72, a family member and a doctor said on Tuesday.

"Amadou Toumani Toure died during the night of Monday to Tuesday in Turkey," where he had been taken for health reasons, his nephew Oumar Toure told AFP.

Although "everything seemed to be going well", the doctor said he was later transferred to Turkey for medical reasons.

Toure, a former soldier, first took charge of the country for a year in 1991, helping to overthrow the previous regime and install democracy.

He won presidential elections in 2002 and 2007 but was overthrown in 2012 by mutinous soldiers who accused him of failing to support their battle against both Tuareg rebels and jihadist insurgents.

Mali has suffered from chronic instability and repeated coups, the latest coming earlier this year.