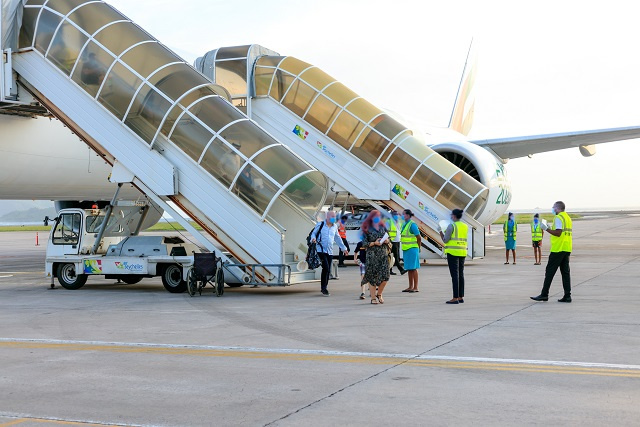 Hassan said the contraction has more to do with the tourists' arrival in the country which is expected to drop by 73 percent compared with a projection of 64 percent. (Salifa Karapetyan, Seychelles News Agency)

(Seychelles News Agency) - Seychelles' economic situation is alarming, the finance minister said Tuesday while detailing how economic growth in the tourist-dependent nation may contract by 13.5 percent instead of the 10.8 percent previously foreseen due to the hardships brought by COVID-19.

The new Minister of Finance, Naadir Hassan, made the statement in response to a private notice question from the Leader of the Opposition, Sebastien Pillay, in the National Assembly on Tuesday.

Pillay asked for details on the country's financial reserves, measures to address the economic situation, cost of living and potential countries that Seychelles will be negotiating with for help.

"The economic position of Seychelles is alarming and the immediate priority is to stabilise it to prevent more impact on the inflation and foreign exchange rate," said Hassan.

He said that Seychelles is expecting to collect SCR1.5 billion ($50 million) less than estimated in the 2020 budget and spend SCR 1.4 billion ($71 million) more.

"This means that we will have a fiscal deficit of 23.2 percent instead of 14 percent that was presented in the 2020 budget amendment," said Hassan.

The finance minister explained that in the view of the "new fiscal performance and new debts and guarantee that the country has taken this year to sustain the economy, the country is expected to end the year with a debt to GDP ratio of 101 percent."

Hassan said the contraction has more to do with the tourists' arrival in the country which is expected to drop by 73 percent compared with a projection of 64 percent calculated in the 2020 budget amendments.

Since the start of the COVID-19 pandemic, the economy of Seychelles, an archipelago in the western Indian Ocean, has been hard-hit by a global travel downturn, although the island nation has seen no deaths from the virus.

As part of the measures to counter the negative economic repercussion, the government is in contact with the International Monetary Fund (IMF) to discuss a new programme of economic reforms that will help Seychelles navigate the difficult times ahead.

"It will be important for us to understand its impact on the population if we embark on any programme set by IMF. At all times, the interest of our people remains primordial in any decision taken," said Hassan.

He added that the "government has already started discussions with friendly countries to see what help we can get and we are still waiting for an answer."

Data from the National Bureau of Statistics (NBS) shows that Seychelles' GDP contracted 17.2 percent in the second quarter of 2020 compared to the same period a year earlier.

On the country's financial reserves, Hassan said that as per the last information given by the Seychelles Central Bank (CBS) as from November 6, the country's reserves stood at $566 million and the amount that can be used is $428 million. The calculation shows that this reserve will last the country for about 18 months.

Hassan said that the government has already started discussions to identify avenues where the country can get foreign exchange and on measures that can help reduce pressure on the demand for foreign currency.

As for the new strategy that will be adopted by the new government to deal with the cost of living, the Minister said that since he has taken office, there is an important evaluation being done by technicians to evaluate the economic performance and measures that will be put in place.