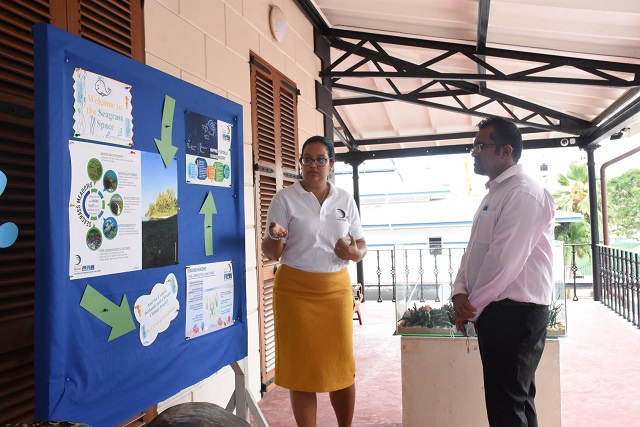 This week SeyCCAT is hosting an exhibition showcasing its projects and raising awareness on climate change adaptation at the National Museum. (Seychelles Nation)

The 34 projects which emphasised investment in women and youth in the Blue Economy are women and youth-led, have young people and women as beneficiaries and are supporting small-scale fishers.

Activities are taking place this week to commemorate the fifth anniversary of SeyCCAT.

"In only five years, we have evolved from an organization created to facilitate a transaction that is the debt-for-nature swap, to be a name on the world stage in supporting the government of Seychelles to meet their ocean conservation and climate action ambitions and a model for other conservation trust funds," said Angelique Pouponneau, the chief executive of the trust.

According to Pouponneau, "SeyCCAT devotes a lot of its time to mobilising more resources to invest in Seychelles' blue future." SeyCCAT was established in November 2015 after the debt-for-nature swap which saw $21.6 million of Seychelles' external debt re-structured on more favourable terms.

SeyCCAT is a first of its kind in Seychelles – 115 islands in the western Indian Ocean - and in ocean conservation. A non-profit trust fund was set up to oversee and manage this initiative, which ultimately led to investments in ocean stakeholders in Seychelles. Its main objectives encompass education, bold actions, and sustainable blue prosperity.

"Although a small organization, SeyCCAT has disrupted the Blue Economy landscape by ensuring the inclusion of more actors in the development of the Blue Economy by providing grants to support Seychellois ideas," explained the CEO. Pouponneau added: "Through the grants, we ensure that the Blue Economy is driven and owned by the people themselves to take action to secure their sustainable future."

Other successes of the trust are its Blue Grants Fund - a dedicated pot of capital that offers grants to local businesses, non-profits and government agencies. The Blue Grants Fund is predominantly formed by two sources: $21.6 million debt-for-nature swaps and $700,000 from Seychelles' Sovereign Blue Bond.

That bond helped raise $3 million. SeyCCAT manages $700,000 of those funds as a source of capital for Seychellois-driven initiatives, which receive this capital in a form of grants.

This week SeyCCAT is hosting an exhibition showcasing its projects and raising awareness on climate change adaptation at the National Museum in the capital city of Victoria as well as a series of lunchtime talks.

The talks, which are open to the public, cover SeyCCAT's achievements and opportunities, the wonders of seaweed, Seychelles' climate change plan and the mapping of Seychelles waters resulting in 30 percent of its seas being protected.

Other activities include the screening of a documentary -- "Mission Blue" -- for school children as well as an art and poem competition entitled "The Voice of Seagrass Meadows".

Newly awarded small and medium projects under SeyCCAT were also announced. These include two children's book, mangrove restoration and researches.

Sheena Talma's project is about the sustainability of fish.

"This project works with different stakeholders, collaboratively to understand whether a project that would look at the sustainability of certain fish consumed would be something that Seychellois would like to consider," she said and added that the project will work with the fishing industry, hotels as well as the public in general.