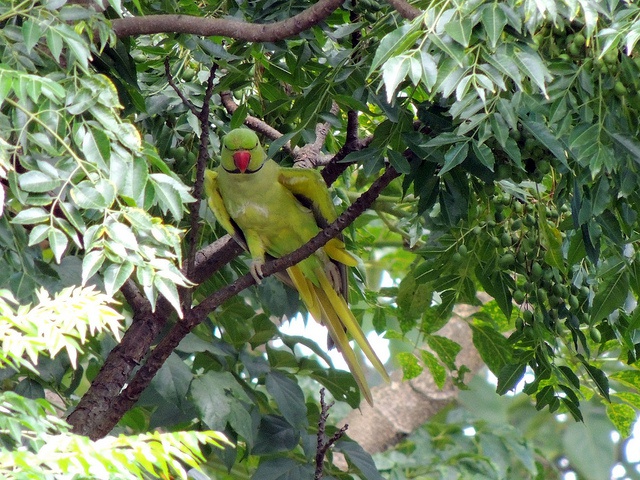 (Seychelles News Agency) - The worst fears of the Seychelles Island Foundation (SIF) have been confirmed: an invasive species known as the green ring-necked parakeet has spread from the Seychelles’ main island of Mahé to the second most populated island of Praslin.

The discovery has left the future of the Seychelles black parrot, which is endemic to the Seychelles and can only be found in the SIF-managed UNESCO World Heritage Site of the Vallée de Mai, hanging in the balance.

“We found a green feather on one of the trails of Vallée de Mai and it fits the description of the green bird,” the information coordinator of the Vallée de Mai Maria Brioche has reported to SNA.

The discovery has also been confirmed through a detailed investigation conducted by Wilna Accouche, SIF’s Science Programme Officer.

The ring-necked parakeet is thought to have been introduced in Seychelles as caged pet birds and accidentally introduced into the wild in 1996. A national campaign was first launched back in 2003 to rid the island nation of the invasive species but was discontinued in 2005.

Another campaign that began in 2011 by the island nation’s Ministry of Environment and Energy and the SIF, to study and eradicate this bird has proven to be more successful to date.

The current population of the ring-necked parakeet is estimated at 150, down from around 400 birds prior to the start of the eradication programme in 2013.

But now it seems that the campaign, which was focused mainly on the affected island of Mahé will now need to be taken to other islands in the Seychelles archipelago, starting with Praslin.

A menace to the endemic black parrot

According to SIF there has been confirmed sightings of a single ring necked parakeet Praslin but there have also been unofficial reports of two of the birds being spotted on the island, which is the habitat of the Seychelles Black Parrot.

The endemic bird is already listed as ‘vulnerable to extinction’ on the Red List of the International Union for Conservation of Nature (IUCN) as its entire population remains below one thousand individuals.

But the confirmation that the destructive bird has now reached Vallee de Mai has raised concerns among conservationists.

“The ring-necked parakeet will be in direct competition with the local population of the black parrot, as they have similar foliage environment, nesting habits and feeds on the same type of food,” SIF ranger, Terrence Payet, told SNA.

“Breeding of the species is difficult and we have observed quite a lot of chicks starve to death as there is not enough food for them and they are also threatened by predators such as rats and Mynah birds,” said Payet.

Conservationists are also concerned that the ring-necked parakeet, believed to be a carrier of a contagious viral disease named Psittacine beak and feather disease will also infect the native parrot.

An elusive and unknown distribution

The ring-necked parakeet, which can fly relatively long distances, has also been observed or killed on other islands of the archipelago including Silhouette, the fourth largest populated island in the archipelago.

“Compared to the black parrot, this type of parrot can fly long distances and therefore they can easily hop from one island to another,” said Accouche, adding that the species “will definitely not stay on Mahé only.”

According to the SIF, the eradication campaign, now already in its fourteenth month, is expected to take a minimum of 12 more months, bearing in mind that the most difficult stages are yet to come before they can be confident that they have achieved their goal.

In a recent article, SNA detailed the different phases of the campaign targeting the invasive species since it first started in 2003.

Accouche said 324 birds of the population of green parakeets have been culled so far.

Accouche also confirmed that another ten birds have been killed in the past week, in the eastern and western parts of Mahé.

“At this stage, with the birds becoming elusive and of unknown distribution across Mahé, we intend to re‐launch an awareness campaign among the population.”

The public have been urged to report any sightings of the green parakeets to the SIF or the Ministry of Environment and Energy.