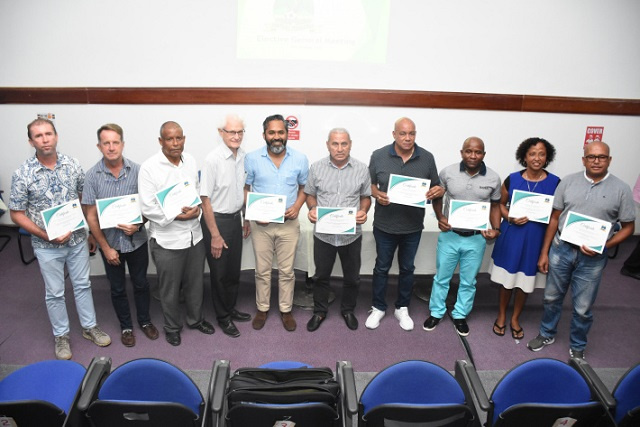 Mohideen and the other members who were elected on the Federation's executive committee in the general election in October. (Seychelles Nation)

(Seychelles News Agency) - A Seychellois women's national football team that performs well at the international level and a player going professional are what the first elected woman on the executive committee of the Seychelles Football Federation envisions for the future.

Shella Mohideen, who was elected on the Federation's executive committee in the general election last month, told SNA this week that she was very happy to join the committee as football is very close to her heart.

"I am in this to make a difference and I am making a commitment to do that. If people see that I am not making a difference they should let me know. I am going to give it the very best," she said.

"There are certain institutions that I believe should have more balance between men and women. When the two genders work together, it brings different perspectives which can produce more positive results," she added.

Mohideen is not new to football in Seychelles, an archipelago in the western Indian Ocean and is actively involved with a top division side, St Louis football club.

Her first focus is doing an audit as she has seen that there has been some regression in the development of women's football in general in the country.

The last time Seychelles fielded a women's team was last year for the Council of Southern African Football Associations (Cosafa) Under-17 tournament where the girls put up a brave performance, despite conceding a huge number of goals, and exited the competition after the first round.

Mohideen said that "we will have to see what programmes exist to equip our young girls with skills. If we are thinking of sending a women's team to play at the international level they must be equipped with the skill and the know-how to compete at this level."

Locally, after years of absence of women's football competition, the Federation organised a short six-team league this year with Mont Fleuri Rovers coming out the winner.

The existing structure will also be looked at "because to implement a good programme you need to have in place a good structure. Once I've done this comprehensive audit then I will come forward with my proposal of what programme we can implement for the development of women's football in Seychelles," she said.

Mohideen is thinking of working with young girls who would like to play football, including working closely with schools to identify talent.